There has been much interest in various homeschooling circles, both in the UK and in the USA, about the Life of Fred math series.  I decided to take a look at the sample pages and liked how the author has interwoven important math concepts into the story, while introducing broader philosophical and historical concepts in a conversational style. 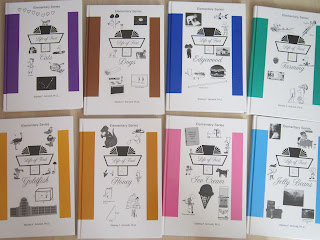 We used the first book, Life of Fred: Apples, last summer and Tiger loved the quirky character, Fred.  We didn't pursue the series further in the year until we found time again this summer, so I ordered the rest of the elementary series , and Tiger read them several times by himself at the start of the summer.

There are rave reviews for the series.  While Tiger loves the series and I think it is an interesting and broad way to introduce some very complex maths concepts to children, I am not sure I would use it solely as our main math curriculum, even though I know of homeschoolers who swear by it.  I get the sense that this series is very successful with children who fear or hate maths, as the series is written in a humourous way to grab children's attention while exposing them to the applicability of mathematics in real life situations via the adventures of Fred.  For a child who already enjoys maths (e.g. Tiger) this series is useful to the extent of exposing him to concepts that he would otherwise come across much later, and to use them as jump-off points to investigate certain areas further.

Having said that, Tiger enjoyed the series so much that I decided to sit with him in August to work through all the end-of-chapter questions to make sure that he did not gloss over the parts that he did not understand.

Things began to become more interesting for us in the sixth book, Life of Fred: Farming, where concepts such as sets and factorials (amongst a host of many other non-mathematical concepts) are introduced in a straightforward way.  I like the way the author is commited to introducing seemingly complex mathematical ideas in a straightforward manner.  Nowadays, many subjects have been made confusing and complex to the learner due to poor quality teaching and/or unnecessarily complicated explanation.  Mathematics, when explained in a straightforward way, should not be an intimidating subject to anyone.

We have completed the series up to Life of Fred: Goldfish.  There are 3 more books in the elementary series, so it looks like we'll be seeing Fred again next summer!

**Note: I am not affliated with the publishing company or the author of this curriculum.  Neither am I paid in any way to say anything about it.  This review is done purely out of interest to share our experience with using this curriculum.