So, How Did the First Year of School Go?

So one full school year has gone by.  Actually, Tiger's school holidays started two weeks ago, but I've only just found the time now to share Tiger's end-of-school-year report. 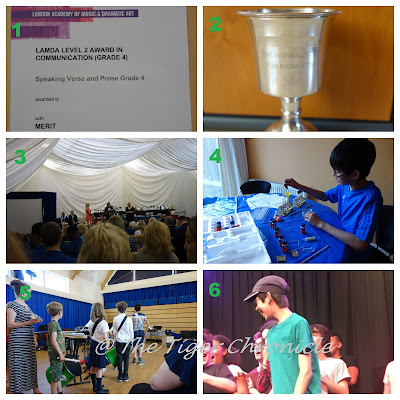 I attended his end-of-year school assembly (photo 3), which we were told was compulsory for every parent and child to go.  Tiger, being the pre-teen that he is, was very grumbly that Saturday morning and I was not particularly in the mood for spending an entire Saturday morning sitting in a school hall after an intense 60-hour week of work.  Anyhow, both of us showed up expecting to be bored out of our minds.

To my utmost surprise, when I looked through the programme and awards list, I found Tiger's name in several places:
An interesting observation I have about prize-giving in school, or in Tiger's school only since I don't know what it's like in other schools here, is that there seems to be a need to give as many out as possible.  For example, there are three prizes in each Form:
There's also one for being in second place - a certificate of commendation.  Tiger's best friend won this.


I imagine the many different prizes are to encourage as many children as possible to strive for better results.  However, I do wonder about the 'dilution effect' of having so many prizes for all kinds of categories.  What does it really mean to get a prize for "effort" or for "improvement"?

For good measure -- to check that it's just the ultra-competitive side of me thinking the above -- I checked with Tiger and Tortoise separately about what they think of the other prizes.
Tiger's response: "Everything else is 'meh'."
Tortoise's response: "What's the point of the effort prize?  The fact that you didn't get the top prize tells you that you need to put in more effort.  And the improvement prize?  Your baseline must be very low to start with to be given that prize."

Ok... so spoke the two Alphas.

Anyway, there is much more to life than school.

Outside of school, Tiger has been very busy with performing arts coming up to the start of summer:
The last one I am particularly proud of, because this is the first year in which Tiger did all the preparation and practices for the exam by himself.  Through his own effort, his score is 3 marks away from 'distinction' and in the interpretation/knowledge section of the exam, he scored 20/20!

In summary, a very good first year of school.  Even though Tortoise and I still have our doubts about how well the whole concept of going to school is, Tiger has definitely grown in maturity, independence and resilience by being in a non-home environment.  In fact, having a year group to pit himself against seems to have brought out the competitive streak in him like never before.  To be fair, there was no real chance for him to compete against anyone of similar age when we were homeschooling.  On hindsight, the lack of competition seems to be a contributing factor to his angst and frustration back then.

We are now planning for the summer.  I will share our plans very soon.
Posted by Hwee at 11:33 pm