I don't post about what we do for music education often here because:

Sure, we listen to Classic FM in the car often, as a way to cultivate Tiger's taste in this genre.  We also attend ballet and opera performances at the Royal Opera House every now and then, and I also teach Tiger to play the piano, about musicianship, and music theory at home.  Is this enough?  It seems to be ok for the most part, but I keep having a nagging feeling that I ought to be doing more.  Hence I am putting together a plan for the new year that I hope will make our music learning more engaging.


Music Appreciation
We have been listening to classical music for a number of years.  While Tiger can identify a few composers from their musical styles when unfamiliar pieces of music come on the radio, I am not sure there is enough active engagement on the listener's part.  I am not inclined to introduce notebooking simply because I have come to view them to be as effective as workbooks as a tool of learning.  Notebooking and workbooks may work well for some children and for certain subjects, but I personally struggle to find a correlation between filling in pages of names/dates/titles and any real application towards the creation of art and music.  Consider this: does writing down names of artists/musicians, the dates of their lives, the titles of their work enable a student to create his or her own pieces of art/music?  Unlikely.  It is more suitable as a means to help the child become an art/music historian, which is very different from being an artist/musician who actually creates something original.

The act of passive listening also bothers me in terms of the undefined outcome that goes with it.  What kind of result, exactly, are we expecting to see from our children from merely listening to classical music?  I am constantly haunted by a passage that I read in The Element which describes how Paul McCartney and George Harrison, who went to school together and loved music but didn't enjoy music class where all the music teacher ever did was to let the children listen to records of classical music.  The book went on to say that their music teacher never thought they had potential as musicians, to which Robinson responded with, "He had half the Beatles in his class and missed it. That was a bit of an oversight, if you don't mind my saying."

With the above in mind, I want to develop a more systematic, active, and engaging approach to our Western music appreciation.  I aim to cover the following topics as a foundation:

Composer Study
As we work through the above topics, I expect that we'll naturally branch out to study relevant composers as we come across them.  Just off the top of my head, these are the composers that will probably be relevant to us:
The way that I envisage composer study to work for us is that it will be very similar to the way we approach artist study, i.e. using biographies and documentaries.  An alternative to tie composer study into music history by going through the different periods of music in the same way as one might learn about artists through the different art movements.


Piano, Music Theory, and Musicianship
After a few year's of extremely slow progress at playing the piano, we have established that Tiger's interest does not lie in becoming an instrumentalist in the traditional sense, i.e. he's probably not going to get the LTCL from Trinity College at 17 like I did.  However since I am able to teach him to play the piano, learn music theory and musicianship at home, we will continue to do so on a regular basis, with the understanding that these skills are to form the foundation of Tiger's musical knowledge.


Electronic Music and Production
Tiger has been playing around with music production software for some time.  While he has not been overly enthusiastic about listening to classical music or piano lessons, he works on the software to create different rhythms, beats, and sounds, whenever he has time in-between our lessons at home.  Seeing this reminds me of another passage in The Element which tells of how "Paul McCartney could not stand music at school, but he discovered his own music and became Paul McCartney."  The idea that I glean from this is to give Tiger the opportunity to just play around and experiment with music making, even if it is not happening in the medium that I recognise, such as playing a traditional musical instrument. 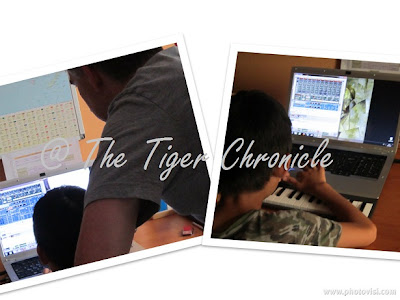 While there are many online courses for electronic music, I plan to let Tiger play around with Reason while working through the online tutorials and getting some tips from Tortoise (who had trained with Berklee) every now and then .


Other Exposures
1.  Singing - Last year Tiger had an opportunity to participate in a 6-week choir training where he learnt many aspects of singing (e.g. pitch, tone, rhythm, harmony) through musical games.  At the end of the six weeks, the choir performed what they had learnt at a care home for the elderly.  I thought the performance was good in that:

2.  Music workshops - A while ago Tiger attended a junk-percussion workshop at Wigmore Hall. 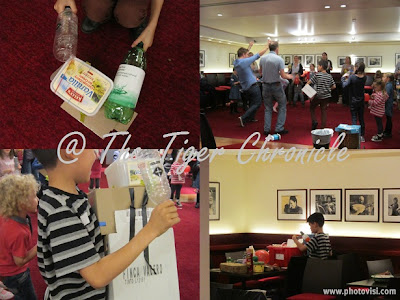 The purpose of the workshop was to encourage children to make their own percussion instruments out of junk materials such as soda bottles, cardboard boxes, elastic bands, beans, etc, then improvise a rhythmic piece to go with their instruments.  Below is a clip of Tiger's home-made "drum":


After they have presented their improvised instrument and music to the group, the children had a chance to work in small groups with a professional musician to play with musical ideas and to compose a group piece to perform to the other groups.  Tiger's group leader was a drummer so they had a great time jamming together.


I will be keeping my eyes out for more singing and workshop opportunities for Tiger in the coming year.

Based on the above observations, and after reading passages about Paul McCartney's unpromising start in his early music training in The Element, I have had to reconsider my assumptions that:

His enthusiastic participation in what I consider to be the non-traditional ways of music training is forcing me to "stop being a classical music snob" (as Tortoise would say) and to broaden my own ideas of what constitutes music making so that I am able to support Tiger more meaningfully in this area.  The last I want is to become an adult like Paul McCartney's teacher who drew the wrong conclusion about his student because he was blindsided by his own traditionalist ideas of what a potential musician should look like.