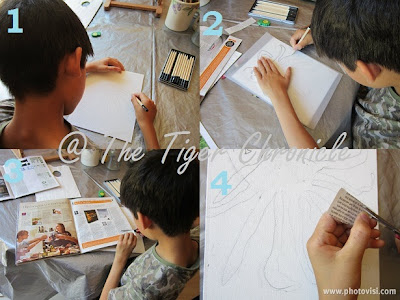 We found that mixed media projects are much more involved than single-media projects.  Not only did Tiger have to sketch his drawing on a canvas board (photo 1), he had to cut out pieces of papers to fit into shape and size of his image.  After several unsuccessful attempts at trying to fit the cut-outs -- originally cut in a freehand style -- into his image, I suggested that Tiger use a tracing paper to trace his drawing (photo 2), then use the shapes on the tracing paper as templates to have a precise cut of the magazine papers (photos 3 and 4).

With the papers cut and put aside, Tiger started to paint the background of the canvas board with acrylic paint. 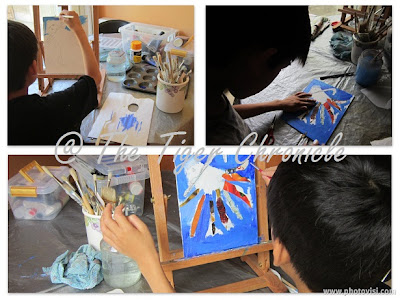 The cut-outs were glued on using a matt medium (which acts like a strong form of watery glue).  After that was done, Tiger did some touch ups on the board to blend the colours more and to make sure that there were no white spaces left on the board. 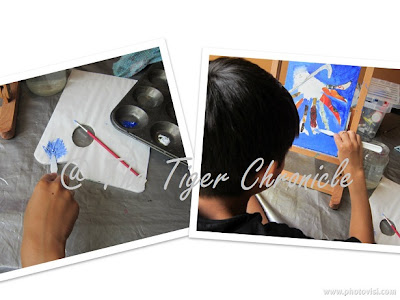 Somewhere along the lines, he discovered that he could paint with a palette knife, which he has been using for colour mixing, so he gave that a try as well. 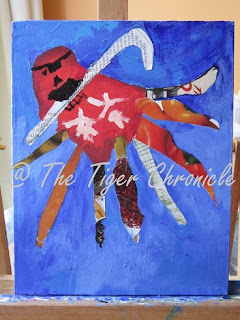 Lab 45: Acrylic and Ink Abstracts was the final project we did.  It started with Tiger dropping a few drops of diluted Indian ink using a pipette onto a canvas board, then blowing them around with a straw to create criss-crossing lines. 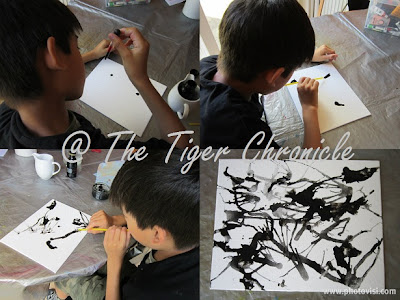 While the ink was drying, I asked Tiger to look at the lines and shapes created on the board, to decide what colours felt right to be used.  He then proceeded to mixing the colours that he wanted to use for the abstract shapes that he had identified. 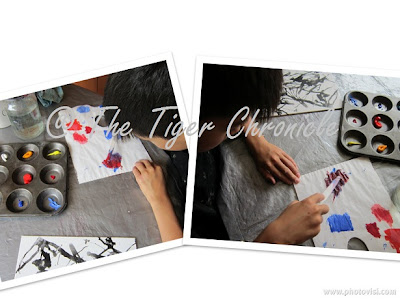 Acrylic paint was applied to the canvas board to 'draw out' the shapes that Tiger wanted.  After the initial shapes were drawn out, we spent a little bit of time discussing whether to leave the abstract painting as it was, or whether to use the Indian ink to draw the outlines of the shapes to make them 'pop'. Tiger decided that he wanted to use the ink for outline. 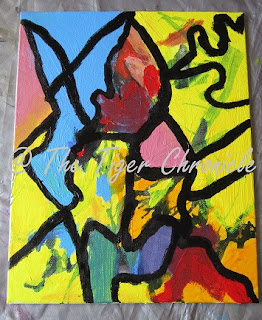 This concludes our Art Summer School where we have done exercises on: