The drama of it all

Pretend play has been, and still is, a big part of Tiger's play most of the time.  I think it's marks the growth of imagination, from starting with him pretending to be a certain character from 2 years old (we have gone through phases whereby Tiger was a Native American Indian chief, to being Bob the Builder, to being certain animals) to increasingly sophisticated one-man reenactments of battle scenes completed with strategies, war plans, self-made weaponry, and armour.

While I have been observing all of these developments with amusement and participation, I have been wondering when and whether to introduce Tiger to drama will be useful.   Personally, I think drama, when delievered in its most sincere way, is a highly sophisticated and creative performaning art form.  For example, I have great respect for actors such as Anthony Hopkins, Patrick Stewart, and Colin Firth.  However, I have not been too eager to send Tiger to the drama schools around here because their focus on children's classes are too much inclined towards the "cool" factors of being on stage (along the lines of Hannah Montana).  I don't share that ethos so classes with such a focus is not suitable for us.

At the same time, I am aware of the short window of opportunity to expose Tiger to the idea of self-expression through drama, with it being an extension of his existing pretend play but with guidance towards sophisticated techniques, before he reaches an age where he becomes overly self-conscious.  Therefore, when a short taster course for children came up at a professional theatre some distance away, I signed Tiger up for it, despite his initial misgivings and doubts about whether he would enjoy such an activity.  I was taking a slight risk here, given Tiger's previous very brief encounter with drama didn't go very well.

To my surprise, Tiger enjoyed the taster course so much that he has expressed his enthusiasm for more.  That's good news.  I attended a short performance held on the last day, which was a way for parents to see what the children had learned during the 4-day course: improvising, moving, creating melodrama, making costumes, making posters, and remembering lines. 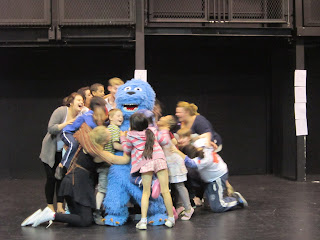 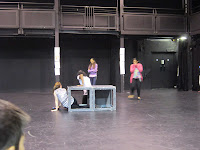 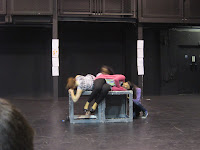 While Tiger enjoyed the course, I got a glimpse of the pop culture tendency in the performance and techniques, which makes long-term commitment to the classes offered there unsuitable for us.  Nonetheless, the short course served its purpose to open Tiger to the possibilities of taking drama classes in the future.