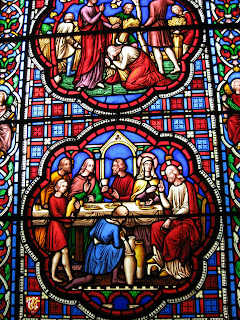 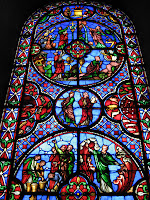 Medieval stained glass is not only colourful, but its making is more complicated than what we thought.  Before we spent an entire day at The Stained Glass Museum at Ely Cathedral to learn all about this art form, we had thought that stained glass was made with one big sheet of glass painted in various areas following a design pre-drawn on that single glass sheet.  Well, we were quite mistaken. 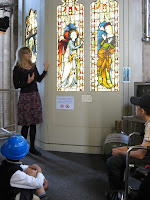 Usually the stained glass windows are way too high up in the cathedral to get a close look at them.  At the museum, there were a few smaller windows on display so that visitors could get a really close-up look at them. 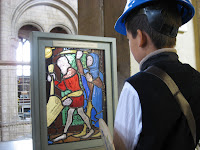 We were then given a guided tour of the museum where we saw many of the pieces on display, while the guide gave us a good summary of: (1) the period in which each piece was made, (2) where they were made, and (3) the story behind the pieces.  The museum has quite an extensive collection that ranged from the 12th Century to 20th Century, and these pieces were collected from different places (mostly Europe, but some from North America and Asia).  You can see the museum's collection here.

The second part of the workshop was conducted by a re-enactor dressed as a Benedictine Monk.  He gave us a very interesting explanation of: (1) the purposes of stained glass, (2) who made them, (3) how the craftsmen were paid, (4) how the craftmen were trained, (5) ingredients used to make the different coloured glass, (6) the process of making glass, and (7) the medieval stained glass making process. 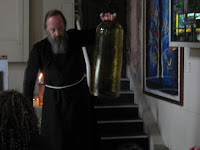 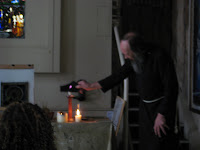 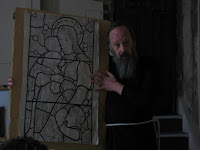 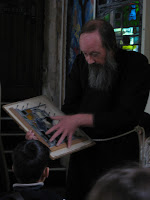 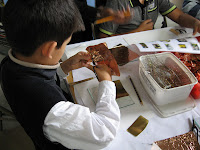 In the afternoon, the children got to work with glass.  The actual stained glass process is way too complicated for this age group, so the children got to do a fused glass project instead.  This part of the workshop was led by a glass artist who explained to the children: (1) what the project was about, (2) how to use the different materials, and (3) what to consider in their designs in terms of spacing, layering and how the materials might change after firing.

We were fascinated by the construction of the cathedral, so we read up on it in the following book.  Not many children's books talk about how the stained glass is made, but I found one page in this book that does so accurately. 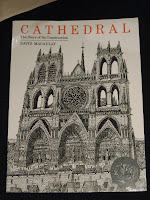 I was also inspired by the stained glass project I saw done by an older homeschooled child here, so I asked Tiger whether he'd like to make his own stained glass panel at home and he said yes!  He had to want to do this since I wouldn't want to take over the project, although it was very tempting to do so.

Once he was keen about the project, I showed him the instructions that we would be following from here.  Tiger then looked through a few medieval patterns from this website before deciding upon the knight.

Tiger watched as I showed him how to scale up the original A4 sized pattern into one that will fit the 51cm x 40 cm frame.  To make the pencil lines more visible, I went over them with a black Sharpie pen. 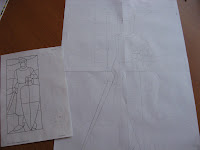 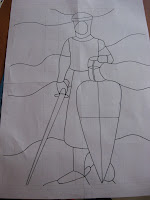 Once the outline was done, I put it in the frame and handed the project over to Tiger.  I kept the glass in its frame for safety reason.   The first thing to do was to go over the outline with the black acrylic paint thickened with PVA glue.  The wobbly lines show that it was quite difficult to control the outflow of paint from the tube.  We had to wait 24 hours for the black paint to dry. 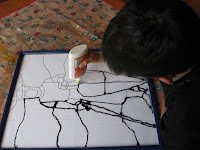 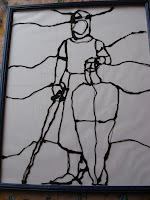 The next day, while waiting for the paint to dry, I asked Tiger to think about the colours he wanted to see on the stained glass and to colour them in using the original A4-sized printout. 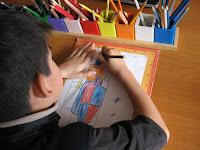 After the colouring in was completed, it was time to put the paint on!  We thickened the acrylic paints using PVA glue since I did not have clear glue at hand, but I think clear glue would have worked better to provide the luminosity of the colours. 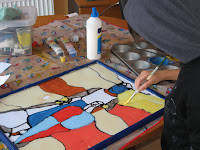 It took about 24 hours for the paint to dry completely.

This post is linked up to:
1) several blog hops, where you can visit to see what other homeschoolers have been busy with;
2) the Carnival of Homeschooling - Saintly Edition;
3) the Homeschool Showcase #84;
4) the November 2011 Edition of The Hands-on Homeschooling Blog Carnival; and
5) the Classical Homeschooling Carnival #21. 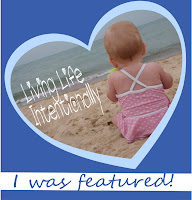