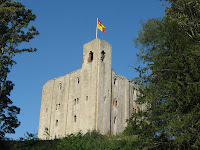 To clarify matters from the week before last, we headed over to Hedingham Castle to attend a half-day living history event of the year 1142 (organised by a really lovely homeschooling lady), which told of the struggle between King Stephen and Queen Matilda for the English crown.  Hedingham Castle is relevant to our story because the man who lived there at that time was on the side of Queen Matilda, who made him the first Earl of Oxford. 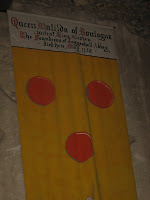 As we entered the keep, we found many banners hung on the walls that told us about the significant events that were associated with this castle.  However, to make things complicated, we realised that there were at least 3 Matildas involved:

See what I mean about confusion? 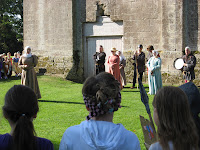 The event was organised such that the struggle between Matilda and Stephen was used as the thread that weaved through the day, with each re-enactor taking the role of a character who would had lived in the castle during that time.  The children spent 30 minutes with each character to learn about his/her role and its relevance to the Norman period.

The first area we went to was a mock jousting ground.  After a brief introduction to the history of jousting, its purpose and the rules of the game, each child had a go at jousting with a wooden lance and a hobby horse. 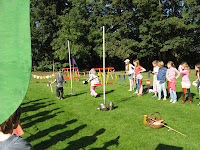 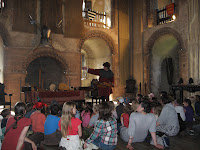 Next, we learned from the minstrel about the different types of instruments that were played at that time.  The minstrel was indeed a very talented man, for not only did he have to train for 9 to 11 years before he could even begin to look for a job, he had to be able to play all the instruments that were available.  The re-enactor is himself a very talented man who can indeed play all the instruments on display, and he even made those instruments himself!  Wow.  He played for us several tunes on a few of the instruments, so that we could hear what they actually sound like.  Since he is also an instrument maker, he gave us very detailed explanations of the mechanics of each instrument, and its history. 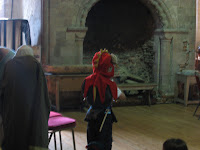 Then we were invited to the Lady of the Castle's chamber, where we learned who her servants were and what their duties involved.  Tiger volunteered to the jester and told his favourite joke to everyone (an audience of about 30 children and 20 adults).

The most animated character of the day was probably the armourer who was stationed in the dungeon, which explains why the photographs are so dark there (as I did not want to interrupt the session with my camera flash). 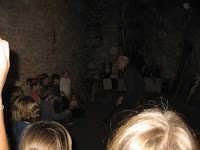 The armourer had a really loud and coarse voice, or maybe he was merely getting into his character, which put us all in the appropriate mood to be in the cold, dark dungeon to learn about the various weapons that would cause severe injury and gruesome death in a battle/siege. 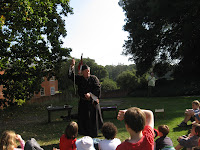 After the gory talk about weapons and warfare, the next character we went to was the priest.  He told us the roles taken by the priests at that time in politics, religion and medicine. 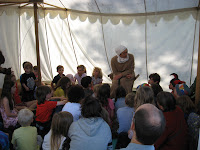 This was followed by story-telling in a tent by an Anglo Saxon servant girl.  The children were told of how the social roles of the Anglo Saxons changed since the Norman conquest, and the story we heard was one that would not be told to the Normans -- the story of Hereward's resistance against the Normans. 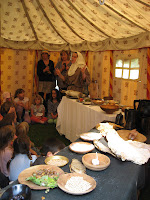 Having had a taste of the inequality between how the Saxons and the Normans were treated in England after the conquest, we were shown two tables of replica food that would have been common at that time.  The children were asked to identify which table of food would be served to the Normans, and which table would be for the Saxons, and how they came to their conclusion.  We were also told how food was captured (e.g. rabbits and birds), and how they were prepared. 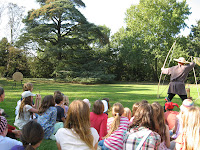 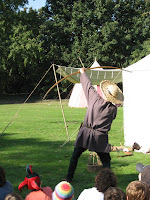 After the scheduled event, we went back into the castle to explore the interiors ourselves.  In the banqueting hall we found the largest Norman arch in Europe. 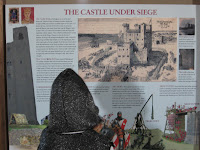 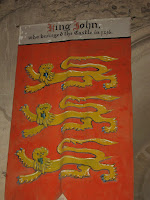 Then we came home to have a delicious Ember Day Tart.  Instead of making individual tarts, I made a family-sized one.  This got a thumbs-up from everyone! 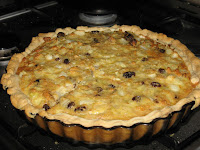 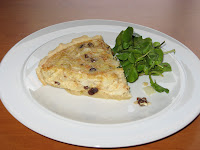 These are the books Tiger read: 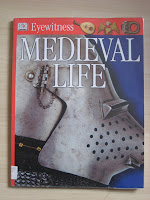 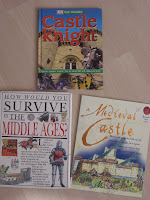 This post is linked up to several blog hops, where you can visit to see what other homeschoolers have been busy with.  It has also been linked to the Homeschool Showcase #83.