We have recently finished reading Beowulf and Grendel for Tiger's bedtime story.  Tiger had read the simplified version to himself in Year 1, so this is not a new story.  The version we are reading now is the complete translation of the original Anglo Saxon poem, which gives Tiger a good sense of how the original Anglo Saxon story was set out.  However, I would not recommend this story to be read to young children who would be frightened by monsters and gore, because there is a lot of that in the story.
To understand the context of the story better, I had Tiger figure out:
(1) where the story took place;
(2) which historical period it belonged to.

What I really like about homeschooling is that I, as parent and teacher, will know exactly how much my child has understood a concept simply by using the narration method.  To 'test' a child, it is not always necessary or appropriate to do it in a pencil-and-paper format or have the child do an extensive project.  Using a few simple questions for discussion, it becomes obvious how much he knows and where the gaps are.

In this case, Tiger has no problem knowing that Beowulf was from Geatland, and that the story was set in Denmark, which he then inferred that this has to be a Viking story and that Beowulf must have been a Viking warrior.

That's good, I told him.  But could he figure out where Geatland was?  And why is this story an Anglo-Saxon epic, rather than a Viking epic? These led to interesting discussions about geography, overlapping periods of Anglo Saxon and Viking periods in Britain, and how we can glimpse traces of early Christian influence on the Saxon culture in the language of the poem.

Both Tiger and I were very curious about the environment in which Grendel lived - fenland.  Luckily, we have been to fens before so we have some idea with regards to how and why the fens would have been an ideal place for a creature like Grendel to live in.  It also helped that we attended a half-day workshop about Fenland Life. However, since the records and tools went as far back as the Victorian period, the workshop focused mostly on how people lived in the fens during this period:


There used to be lots of eels living in the fens, so eels were not only a staple diet for the fenland folks but also used as currency at a time.  Apparently, parts of the Ely Cathedral was paid for with thousands of eels captured in from the fens!  We were shown the prongs that were used to catch eels, as well as the more humane willow casings used to trap them. 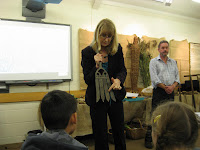 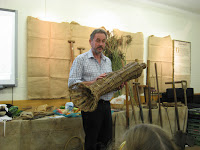 Nowadays the fens don't look anything like they did in the Saxon times, mostly because of the industrial draining that took place in the early 20th Century.  We watched a 15-minute clip that explained how the draining was done, which technology was used, its effect on the ecology and economy in the region. 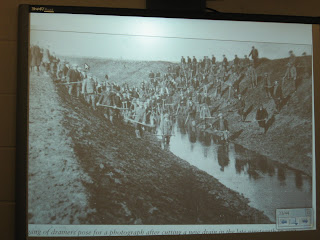 Below is a short clip of how one of the fens reserve look in the present day:

When we came home, Tiger and I read the following book to learn more about eels, which sadly are rarely found in the fens these days: 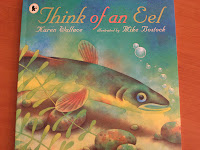