We are putting an end to Ancient Rome, having been deeply involved with this topic for over a year now.  To be honest, I'm all 'romaned out'.

This week we finally started on The Story of the World Volume 2.  The first chapter is, alas, the Romans!  That serves both as a recap on what we did last year, as well as a logical lead into the era that followed the fall of the Roman Empire.  Incidentally, the second chapter starts to mention Britain (the Celts), which sees us again going through a quick review of Romano Britain.

Our Roman adventures came to an end after we had compelted the following activities:

We attended a two-hour handling session at the Museum of London where the Curator of Human Osteology gave us a very detailed walk through of the Roman human remains from the museum's collection, including the actual skeleton of the Spitalfields Lady!

Using the numerous actual 2000-year-old Roman skeletal parts, the curator showed us how archaeologists and forensic scientists determined the age of the bones, the state of health of the person, what kind of disease or illness the person had, the cause of death, how the bone structures reveal where the illness occured in the body of the person while he/she was alive. 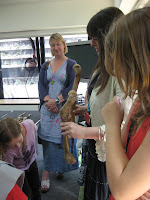 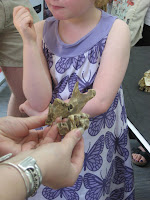 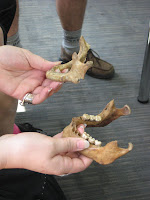 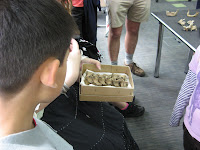 This session was very different from the other history trips we have been on so far because of its scientific focus.  While we have been on several field trips that looked into deaths and burials -- where the emphasis was on using evidence gathered from burial sites and burial goods to determine the living conditions of the deceased -- this was the first time we hear an expert tell us about the scientific aspects of history and archaeology.  We were also told about how carbon dating actually works and what its shortfalls are in terms of exactness in dating.  Apparently when using carbon dating methods, one must give an allowance of +/- 500 years!

2) Roman Food
I made this Roman stew.  The result turned out much like a cross between lentil porridge and a mushy soup.  It sounds disgusting, but both Tiger and I ate it and we thought it was ok.  Not our favourite, but it was edible.  Tiger rated it 3 out of 5, which means he is happy to eat it once but not again.  We got through the meal by imagining ourselves to be Roman soldiers who had been marching for 18 miles that day and were happy to be given mushy food at the end of a long march.  Despite its unappetizing appearance, the stew was extremely filling.  In this sense, it would definitely be an appropriate 'army food' for a very hungry Roman soldier!

3) Review
We worked through all the materials here, as a final review of what we have learnt so far.  For those who are not familiar with the UK mainstream education system, here is a quick explanation of what the term KS (key stages) mean.


This post is linked up to several blog hops, where you can visit to see what other homeschoolers have been busy with.
Posted by Hwee at 4:48 pm