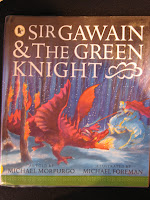 Tiger has been fascinated by the idea of knights since he was 4.5 years old.  Eversince he started reading at 5 years old, he has read every knight-related book I can find in our county libraries.  Somehow, the whole idea of knighthood has a very strong appeal to a little boy.  Perhaps it's the whole romanticised idea of Arthurian chivalry that enthralled him.  Therefore, when I took him to a Knight's School to be 'trained' as a knight, he was over the moon. 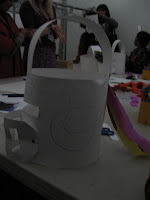 The session consisted of two sessions: (1) a craft session wherein the children made their own knight's helmet out of cardboard, and (2) a 'training' session hosted by two re-enactors: a Knights Hospitaller and a common knight.

The craft session went on successfully.  All the materials were well prepared and set out so most of the children completed their helmets independently.

The training session was also very interesting.  The Knights Hospitaller gave the children a brief introduction to the roles of knights in the Middle Ages, and taught them different combative moves.  It was all a bit of silly fun until the last bit  -- the 'graduation ceremony' when he declared that the children had completed their training and would be 'knighted' to receive their certificate. 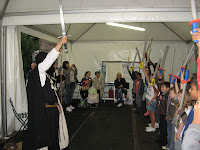 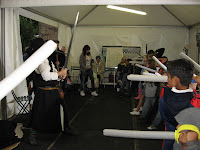 There were about 30 children in total, and over 20 adult there.

At the command of the Hospitaller to kneel to be knighted, all 30 children immediately went down on one or both knees to receive their 'knighthood'.  All, except Tiger.  He remained standing.  The Hospitaller motioned for him to kneel but he just stood there.  Everyone was staring at Tiger.  Below is the actual conversation that took place in the two minutes that felt like a lifetime:

Hospitaller: Kneel to be knighted, boy!
Tiger: (still standing, shook his head).
Hospitaller: Why won't you kneel?
Tiger: I am a free man.  We are equal.  I don't have to kneel to anybody.
Hospitaller: (paused for a brief moment, slightly shocked).  But it's a sign a respect!
Tiger: I will shake your hand as a sign of respect, but I won't kneel.

At this point, both of them (and all the other adults) turned to look at me.  I can't tell you how tense the atmosphere felt at that very moment, but I spoke directly to Tiger, "That's right.  All humans are equal.  Nobody needs to kneel to anybody."

Tiger still received his certificate at the end of the day.

I doubt we'll be invited to tea at Green Park anytime soon.

On the way home, Tiger and I discussed the roles of knights.  In spite of all the books Tiger has read about knights, it has not clicked for him that knights were essentially soldiers who worked for someone else (the king or other nobles), hence they would have had to obey orders given by those who provided their livelihood if they wanted to keep their jobs.  Tiger looked slightly disappointed at this realisation but I was glad that this to-kneel-or-not-kneel incident gave us the opportunity to clarify matters and to slowly chip away at the naive/romantic idea that (1) all knights were good and chivalrous, and (2) all knights were their own masters.

Out of curiosity, I asked Tiger what he would do if the Hospitalier had insisted that he would have to kneel to get his certificate.  Tiger thought for a while, then his eyes started to go a little red -- this was his first experience of a moral dilemma and he was struggling with the idea of possibly not getting the piece of paper, even though the certificate was already safely kept in his rucksack.

Tiger thought about it for a while, shook his head and said (while trying hard to hold back his tears), "I won't kneel, Mummy."

At this point, I congratulated him for standing firmly behind his ideals.  I also reminded him that the certificate was in his rucksack, and that he got it without having to compromise himself or what he believed in.

Tiger still dresses up as a knight every other day.  However, the difference now is that he is beginning to realise that things are not always black and white.
Posted by Hwee at 8:32 pm