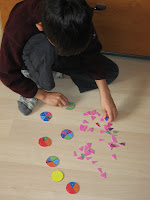 At the beginning of the school year, we noticed that Tiger has gotten the hang of single-digit multiplications up to nine.  I credit his success at cracking the multiplication tables without any pain nor any need to memorise multiplication tables to the RightStart curriculum that we are using, since we don't use anything else for mathematics.  In fact, we are only just 'officially' starting with multiplication in this programme, but I think the strong foundations in addition and the way the curriculum is written just works to help Tiger make the mathematical connections himself.

A knowledge of multiplication is the pre-requisite to starting fractions.  Since this topic is not introduced in RightStart until the end of springtime next year (according to our schedule), I am using a few other resources to do the job.  We are doing fractions alongside our main math curriculum, about once a week.

As an introduction, I let Tiger freely play with the Fraction Circles.  Putting the circles back to their original shape by colour was too straightforward for Tiger, so he decided to see whether they could make full circles using different combinations of the fraction parts. 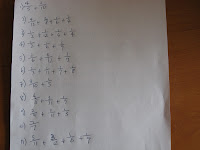 I wrote down all the combinations of the circles he made.  This sheet of paper will be used later when he has learnt about equivalent fractions to verify whether the various combinations work towards a whole.

To keep Tiger's interest going and to introduce the concept of fractions gently, I had Tiger read the following book.  The book is bright and colourful, and introduces the concept in an interesting way such that after reading it, Tiger asked to do fraction work, to which I gladly let him practise on the Modeling Fractions worksheets found here. 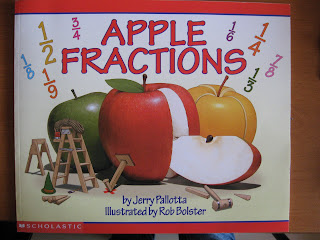 The worksheets above were a huge confidence booster for Tiger and he asked for more, so I whipped out Book 1 of Key to Fractions.  Book 1 is all about concepts so it is very straightforward and Tiger has no problems with the workbook so far.  It is comforting to see him learning this concept so easily but I intend for this part of maths to be supplementary to our main curriculm.  I think we have more interesting things to do with our lives than to sit through multiple workbooks. 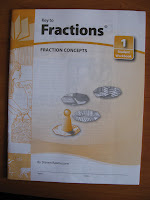 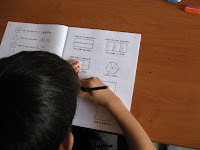 This post is linked up to several blog hops, where you can visit to see what other homeschoolers have been busy with.
Posted by Hwee at 10:21 pm