No Two Days Are the Same: Monday

The days are flying through like a blur for me, so for my own benefit (read: what have we been doing all day?) I decide to make a record of how we spend our time this week.

My alarm rang at 7am but I turned it off and went back to bed.  Tiger came in a little while later to ask me what we would be doing today.  I told him we would wait and see, but that I would like to get on with our routine as well, if that was possible.  He didn't sound too keen and headed back to his bedroom to continue with the game that he has started a few days ago.  I turned to look at my clock, saw the time and cried, "Holy cow!" 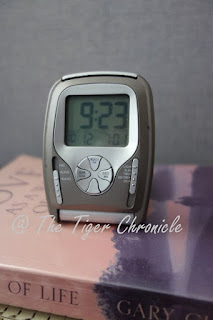 My husband has taken the day off.  He is the welfare manager around here, as in, he makes sure that we get lay-ins, have delicious breakfasts, and generally enjoy a good life.  This morning, while he prepared breakfast, Tiger and I started on our new readings.  By the time breakfast was ready (it took about 20 minutes), Tiger was halfway through his book while I had just finished the preface of mine... 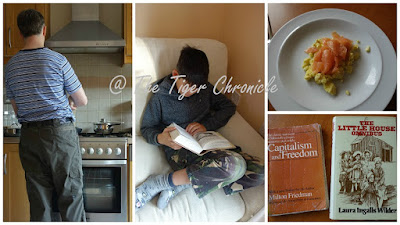 Our meal times at home is usually a long affair because we have lots of discussions, especially when my husband is there.  Hence, by the time we cleared the table and started 'school work', it was 11:30am.

Tiger and I did our morning chores then started with memory work, which consists of him reciting poems out loud.  This is a new practice that we have taken on since September.  The idea is that Tiger will have a repetoire of beautiful poetry that he can call up at will.  Today being Monday (the start of a week), Tiger recited a few 'review' poems (i.e. those that he can recite easily) and worked on others that he is in the process of memorising fully.  The poems he reviewed this morning are:
The ones he is working on are:

As Tiger attends a class on the history of medicine, I recently signed up for a free short course called Brief History of Medicine.  The first episode on prehistoric medicine arrived in my in-box this morning so I read it out to him.  Each episode is a one-page summary of the key development of medicine through history and takes only five minutes to read.  I signed up only because:

Tiger is given homework from his tutorial classes each week.  I am a stickler for completing homework before the next class and I told him as much.  Although Tiger is not a readily compliant child, he agrees with me on this point so he got on with his English homework, which includes an analysis of one of Obama's pre-presidential speeches.  I asked him whether he needed my help.  He said no, so I organised his class notes from last week's classes while he completed his homework.  I also started to cook dinner and had just put all the potatoes on boil when Tiger called me over to help him with a question on the use of a particular rhetorical device. 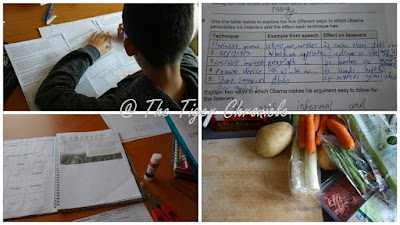 Tiger finished his homework around 1:30pm, by which time we were all starving so I heated up last night's dinner.  My husband joined us for lunch so another round of interesting discussion ensued. 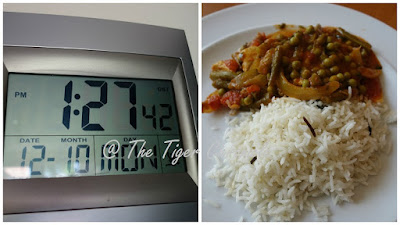 After lunch, the boys decided to go for a walk.  I was volunteered to stay at home to wait for a collection service for something to be returned.  I did not mind that too much since Tiger and I had taken a few long walks over the weekend. 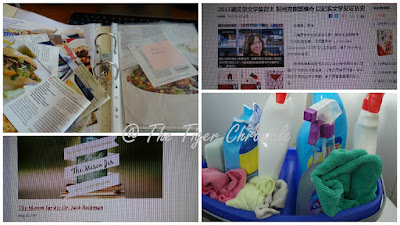 While the boys were out, I:

The boys came home just as I sat down for a cup of tea. 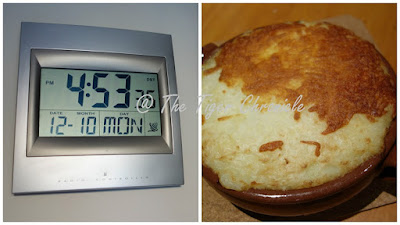 Dinner was served soon after but our dinner session was longer than usual because:

After the drama of a rejected dinner, one would think that should be the end of my day but no!  My husband and I were informed that we were to attend a science class after dinner!  The two adults groaned, "Do we have to...?"  At which point we were reprimanded for having a bad attitude towards learning and told to get our act together by half past seven when the class would start promptly. 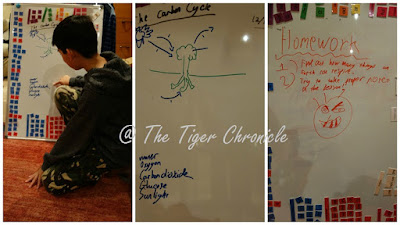 In the half-hour session, my husband and I were shown how the carbon cycle works, and quizzed afterwards to make sure we were paying attention.  Luckily we aced the quiz to avoid incurring further wrath from the teacher.  Nonetheless we were given two homework assignments at the end of the session, one of which was to "take proper notes" at the next lesson.  Our obvious lack of note-taking has been observed and highlighted. 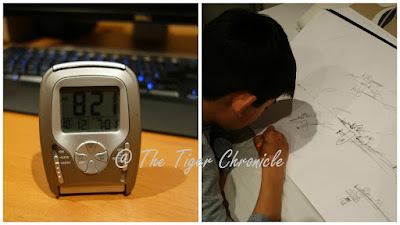 After the late-night science lesson, it was time for bed.  Tiger usually reads to himself but tonight he was drawing so I asked him whether he would like me to read to him as he drew.  He said yes, so I continued where we had left off and started on the story of Samuel Morse and the telegrah.

That was our Monday.

Email ThisBlogThis!Share to TwitterShare to FacebookShare to Pinterest
Labels: our days