No Two Days Are the Same: Thursday 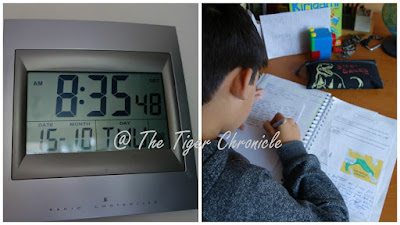 I looked through Tiger's history homework last night before I went to bed, and saw that although he had written a summary of Mesopotamia well in terms of content and coherence -- a result I attribute to oral narration), his written narration is, well... sloppy.  His writing transgressed a few points (such as poor handwriting, careless spelling and a disregard for grammar rules) that warranted a "This is unacceptable.  You have to rewrite it." from me, which he was very unhappy about.

After breakfast, Tiger rewrote the summary in its entirety.  I'll be lying if I told you that he rewrote the assignment cheerfully.  No doubt he was seething with anger over the injustice of being made to write it a second time but he did it anyway, and the final copy was perfect.  It just shows that the poor quality of the original piece of writing was not due to an inability to write well but was caused by carelessness. 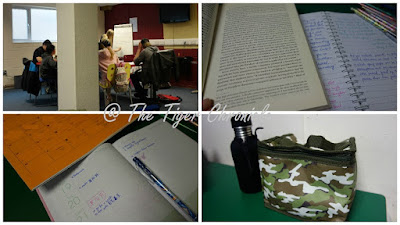 We then headed out to a centre where we spent most of the day with many other home educated children and parents.  I usually sit at a corner while Tiger attends his English and history classes as I like to listen in on what he is learning.  Sometimes I read my own book and make notes in my commonplace book while listening to the lessons (a skill that I developed in primary school), but more often than not, I make write out plans for the following week.  At the centre there is a waiting room where most other parents congregate as they waited for their children's lessons to end.  I usually join them at lunch break to socialise while Tiger has his lunch with the other children in one of the other rooms. 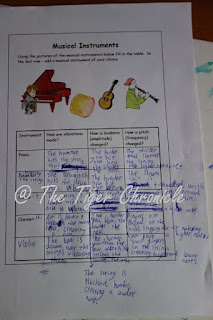 After class, we stopped by the supermarkets to pick up some groceries and reached home at 4pm.  I reminded Tiger that he had not started with his science homework yet so he buckled down and did a part of it (the other part he will complete tomorrow).

It was Tiger's turn to cook dinner tonight.  He is capable of preparing dinner by himself now so while he was busy in the kitchen, I wiped all the non-carpeted floors in the house.  Tonight's dinner was a modified version of Duck with Plum Sauce and Noodles.  You might have noticed that we always modify recipes.  It is because we follow certain dietary restrictions for health reasons. 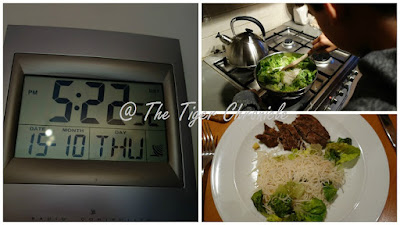 Tiger was ready for bed by 8:55pm but he came downstairs in his dressing gown again (as he did on Tuesday) to draw a tank before he felt happy to go to sleep.  I read to him again tonight and finished the second half of the Samuel Morse story. 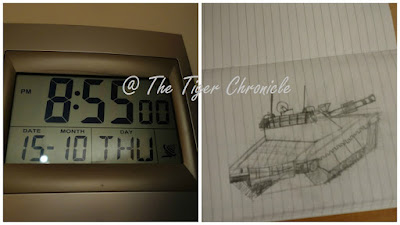 Before I left his bedroom, Tiger announced that he will have a big lay in tomorrow.  Hmm.

Email ThisBlogThis!Share to TwitterShare to FacebookShare to Pinterest
Labels: life skills-cooking, our days