Not finding the mistletoe was somewhat disappointing, so we decided to do something about another plant that is very closely related to Christmas: the poinsettia.  It's such an interesting plant, in the sense that its leaves can have two different colours simultaneously.  For the longest time, I had thought that the red leaves (called bracts) were its flowers! 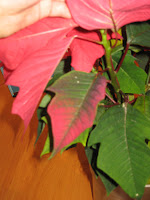 We first learnt more about the plant by watching the short clip here.

We then learned through observation.  I asked Tiger to identify the flowers and leaves of the poinsettia.  I was expecting him to make the same mistake as I had -- to think of the red leaves as flowers.  To my surprise, he actually knew the answers!  He said he got the clue to the answer when he saw a single leaf that was in the process of changing colour.

Our question and answer session then continued with the following questions, which helped to get Tiger thinking about nature's design:
- why are there different coloured leaves?
- where are the red leaves and green leaves positioned?
- why are they positioned as such? 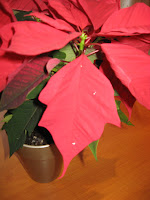 To reinforce what we have learnt so far, I printed off the Poinsettia Booklet from here.  Since Tiger is in elementary grade, we skipped the preschool portions of the exercise and went directly to colouring in the parts of the plant, followed by putting the correct definition card under each part. 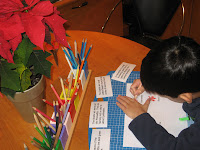 We continued our study of the poinsettia by reading about a Mexican legend of how the plant came about.  Tiger and I took turns to read the story, even though he can read well about his grade level.  Shared reading gave me the opportunity to correct any mispronounciation, and for us to discuss any interesting points that came up. 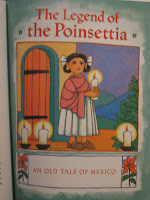 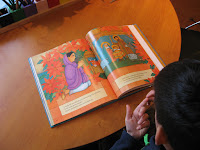 For our hands-on project, I was inspired by the mixed media project I saw here.  As usual, I improvised slightly from the original instructions:
1) The first step was to find a petal-shaped sponge.  I just took an unused washing up sponge from the kitchen, drew the petal shape then cut it out.

2) Then I let Tiger choose the colours he wanted to use and pour them into the tart tray.  We ran out of orange a little way into the project, so Tiger had the opportunity to practise some colour mixing with yellow and red.

Halfway through printing, Tiger realised that the perspective of his prints and how it would show up in the final result was not correct -- the pot would be viewed from the side (see the first photo of this post) while the flowers would be viewed from the top.  Putting both together on a single sheet of paper would create an interestingly distorted view.


3) As we let the poinsettia prints dry, Tiger cut out the flower pot shape from a gold card.  I found the original instructions for this part of the project to be unnecessarily complicated, so I simplified it by drawing 4 lines at the back of a piece of gold craft card.  All Tiger had to do was some straightforward cutting. 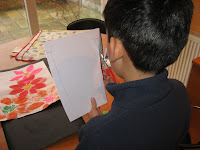 4) Next, cut a few small rectangular pieces from an art tissue paper.  Tiger chose green to represent the lower leaves but any colour is fine.  We wanted the leaves to be a little ruffled to look more natural, so Tiger scrunched up the tissue pieces in his palm before he opened them up then glued them onto the back of the 'pot'. 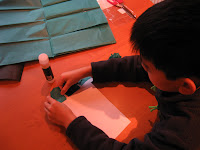 5) By this time, the sponge printing has dried so Tiger cut along the outline of the poinsettia prints to get an overall cut-out of the plant. 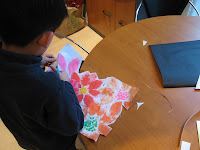 6) Tiger glued the gold pot and the poinsettia cut-out onto a big piece of black paper.  To add some festivity to his project, Tiger went over the outline of the plant with clear PVA glue before sprinkling glitter and confetti on them. 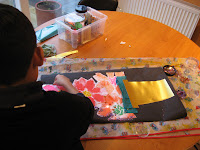 Here is the final result, note the distorted perspective which works well here: 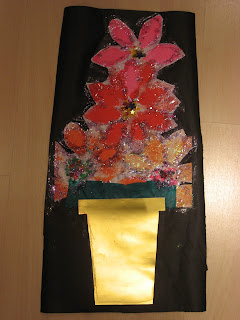