It's not all bad

Tiger's infection has taken quite a toll on his body, making him feel more lethargic than usual these days.  However, instead of feeling defeated by this nasty virus (or whatever it is that is causing the infection), we have decided to learn more about the antibiotics that Tiger has taken, penicillin:


Learning about the history and discovery of penicillin got us excited to conduct two more experiments to learn about the conditions that encourages mould growth.  What was different this time round was that Tiger was asked to make a prediction of the outcome for each experiment, and I explained to him that the scientific term for making a guess is called hypothesis.

He predicted correctly and could tell me the reasons behind his predictions, which were not far off from the intended results.  Tiger's explanations were derived from having casually observed food that had gone mouldy after a while.  It is amazing how much children learn just from daily observations and using their common sense.

(1) Effect of temperature on bacterial growth.


The difference in amount of mould growth on the husk versus the coconut flesh really brought home the concept that mould is a type of fungus that has to get their food from a host. The husk being dry and hard provides less food material to the mould compared to the juicy flesh inside.

We wanted to see what the penicillium looked like close up so we looked through it using our magnifying glass.  That did not show us any more detail than what we could see close up with our naked eyes.  We need a microscope! 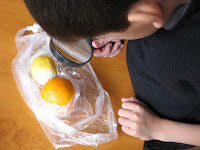 We found the following silent movie to be very informative.  It tells about mould growth and the conditions that would encourage that.  The most fascinating part for us is to see the individual mould spores shown under the microscope, which we could not see using the magnifying glass:


Since we were growing all these mouldy stuff at home, another yucky experiment seemed to be in order.  So we investigated:
4) the effects of yeast on food decomposition

The interesting part of this experiment (for me) was that Tiger did not predict the outcome correctly.  He had mistakenly thought of yeast as a preservative rather than a decomposer.  The error brought about an interesting discussion and new learning about the nature of yeast and its function in baking.

The experiment on decomposition of food led Tiger to wonder about digestion of food in the body and whether the process of food being broken down by stomach acids is similar to what we have observed in experiment (4).  We reckon they are similar.  I think we will come back to this topic when we study human biology a little later.

Meanwhile, I found another clip about food hygiene, which was relevant in terms of food processing, the spread of diseases and microscopic organisms.  It was interesting to watch and very informative, even though what Tiger had suffered from was a viral infection rather than food poisoning.


Having seen all the ugly side of moulds, I pointed out to Tiger that the uses of moulds aren't all bad.  Cheese, for example, is made from mould while alcohol is made from the process of fermentation with the help of yeasts.  Both processes are very similar to rotting, which sounds really disgusting.  However, the end product (after many more complicated steps) can be very delicious, for example the piece of 'Christmas cheese' that I have below:


This post is linked up to several blog hops, where you can visit to see what other homeschoolers have been busy with.
Posted by Hwee at 8:43 am