I decided that we should get back to the basics of maths -- addition -- with the following simple exercise. 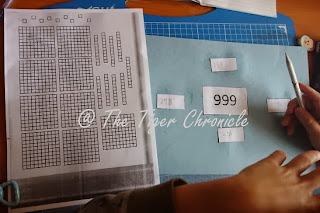 I gave Tiger a copy of a sheet printed with ones, tens, and hundreds boards.  The total of which is 999.  His task was to split the sum into four addends.  Very easy, isn't it?  That was what Tiger thought.

Before Tiger began, we had a quick review to make sure he understood the different terms (addends, sum).  I also showed him a quick example of how he was to split the sum into four addends (example on the bottom left) 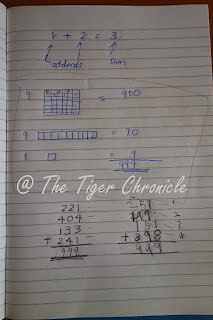 As you can see from the photo above, Tiger split the total of 999 into four addends immediately (the example on the bottom right)

The next task is to cut out the printed sheet and use the arrays to form the addend in each section on the construction paper.  This was where Tiger realised that he had to consider the limitation set by the arrays, i.e. 9 ones, 9 tens, 9 hundreds.  With this limitation, the initial answer he gave (251, 199, 151, 398) could not work.  This made him work a little harder than merely throwing random numbers out to make the sum total.

After some struggle and when Tiger started showing signs of frustration, I suggested that thinking about place values and the limitation set by the arrays and having to split the sum total into four addends at the same time might help.  The light came on when I sketched the array on paper (see pencil mark below): 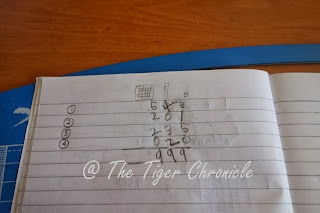 Once he saw the sketches, Tiger understood how to approach the problem.  There are a few ways to solve the problem.  Below is Tiger's solution: 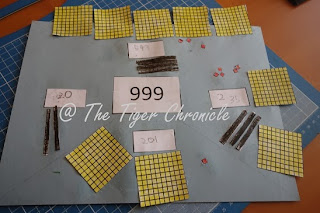