I'm falling out of love with Fred.

Two summers ago, we spent a few weeks working through the Life of Fred elementary series books A to G.  I wasn't overly keen about it in general but Tiger was tickled by its humour so we decided to keep the last three books (H to J) for this summer. 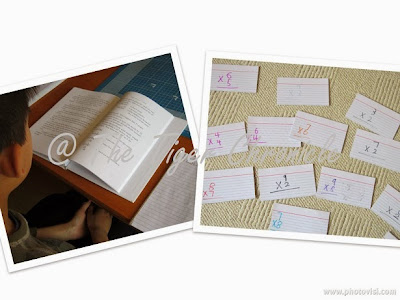 We worked on Book H a few weeks ago but I am even less impressed with it now than I was two summer ago.  The format of the book is still the same as before, the humour is still the same, so my guess is that the change in my opinion of this series is due to a combination of my increased leaning towards a "living maths" approach and an increased understanding of how Tiger learns.

Two instances in the book stood out for me: the first was when we made a pile of multiplication quiz cards based on Book H's suggestion, to be used at the beginning of each lesson/chapter as a quick mental review.  Making index cards to be used as pop quiz is a fine idea but it doesn't work for us for a few reasons:

The second is how the book introduced long division.  While the reader gets a clear example of the steps to long division, the concept behind carrying and remainder isn't clearly explained.  I felt increasingly uncomfortable at teaching Tiger the steps to long division without having him understand why that is so.  The lesson became less of discovery and more about memorising a formula "first do this, then do that, followed by this".  Memorising yet again.  Sure, Tiger can now do long divisions on demand, but I am not happy that he is learning maths through memorising.

Some people might wonder why I am making a fuss here, given that Tiger has no problems doing long divisions whatsoever.  My objection is directed at the way it is being taught, that the method reminds me too much of rote learning, albeit a glamourised one.  I'm sure we can do better than this.

The remaining two books of the elementary series are being put to the back of the shelf.  We might use them next summer, or we might not.  We certainly aren't missing them.