We first started looking at fractions about two years ago but hadn't formally done much about it until this week.

I like to introduce maths in a visual, concrete way, so I took out two manipulatives that have been tucked away in the cupboards from Tiger's preschool days and let him play around with them for a bit: 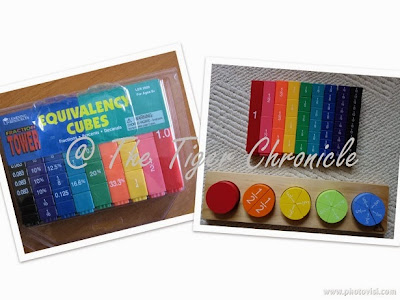 The Equivalency Cubes can also be used to teach concepts of of percentages and decimals.  The main purpose of them this week, however, is for Tiger to become familiar with the concept of equivalent fractions. 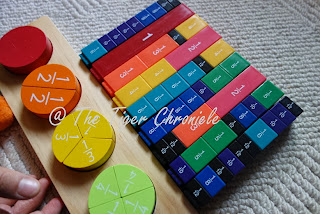 After Tiger has played with the cubes for a while, we started on our fraction activity.  I gave them three sheets of papers, each printed with three circles to be divided into smaller fractions.  For example, the first sheet consists of three circles that have been divided into halves by a line drawn through the centre of the circle.  The idea is to have the first circle remained as halves, and have the student further divide the other two circles into fourths and eighths.  The second set of circles are: thirds (already drawn), sixths, and twelves; the third set consists of: fifths (already drawn), tenths, and twentieths. 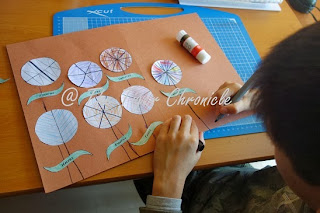 After the division of the circles into smaller fraction parts is done, Tiger cut them out and glued them onto a piece of construction paper (together with each circle's corresponding labels) to make "The Dangerous Fraction Garden", as Tiger puts it.  This step is not strictly necessary to learn the maths concept, but we wanted to have a laugh so we did it. 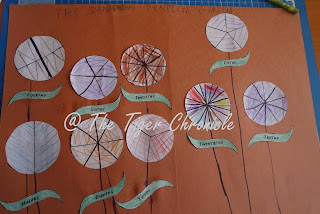 We then proceeded to understand Fractions of a Set.  Using the printed sheets of incremental stacks of 4x5 squares, we first determined the total of each set.  Then, we talked about how much one-fourth of each set would be -- this is quite simple, given that the sets are designed in four rows each.  Finally, from one-fourth of each set, Tiger could easily determine three-fourths of each set by multiplying by three. 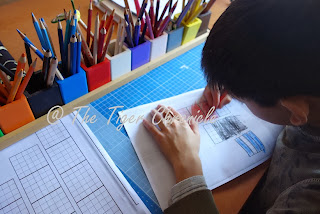 When the colouring is done, we glued both sheets of paper together to have an overall view of all our three-fourths.  It provides a clear visual sense of what three-quarters of an incremental total looks like: 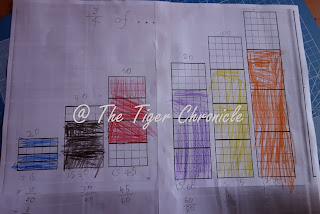 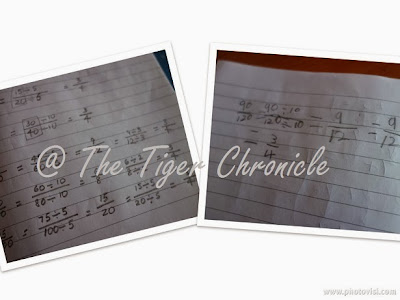 Tiger then worked through some of the problems in the Fractions section at Khan Academy.  We found the drills to be adequate for practice. 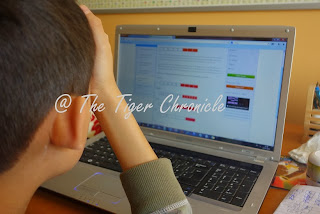 The word problems on fractions present an interesting way to apply what Tiger has learned so far, so that is well worth a try.  When he had enough of drills, he played the Fractions and Coins Game.

Finally, we also learned not to get too hung up about getting perfect scores, especially when in France: