We took some time to resume our study of English history, which we had left off with the last of the House of Angevin, King John. 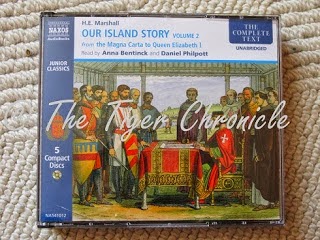 We use Our Island Story for our chronological study of the monarchs.  Usually we listen to the relevant chapters before Tiger narrates them to me to be typed out and placed into our accordian timeline.

As start with our first Plantagenet king, Henry III, I found that there was not much going on with his political life, primarily because he was crowned as a nine-year-old and effectively had people around him (the barons, his wife, his relatives) controlling his life most of the time.


However, we did find the first nine minutes of the following documentary to be a very useful summary of the events surrounding the circumstances of his life:


Even though Henry III did not achieve much in terms of political life (hence not very exciting by medieval standard in Tiger's eyes), his crowning glory came in terms of building the most politically-important religious building in England, Wetsminster Abbey:


It is unusual for us to find the life of a monarch to be uninteresting, but we honestly did not find Henry III's to be memorable.  This is especially so since Tiger has a special interest in warfare, and Henry III is not known for his warrior skills.  His son, however, is much more of a warrior king and thus captures Tiger's imagination more readily.