Something happened recently that has caught me off guard: Tiger invited me to do some shared writing with him!

I know some children are natural writers who are born with a pen in their hands and who just seem to churn out page after page of novels.  Not my boy.  Although he can talk non-stop for hours on end, Tiger has never been one to put more than a few words or a single sentence on paper.  That's why this particular invitation to write, coming from Tiger, is such a big deal to me.

In the summer, I bought him a creative writing book targeted at boys and he seems to have fallen in love with it.  He asked to keep the book by his bedside so that he can work on it little by little, and he doesn't want anybody to see what he is writing.  I think that's his way of protecting his creative muse from Mum's criticism, which is very wise indeed. 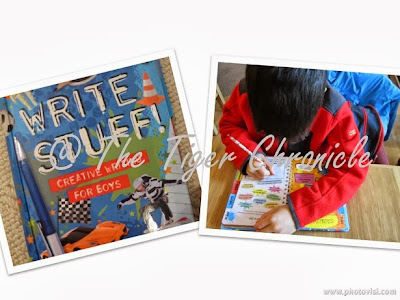 Tiger has been working in the book by himself for a few months, only updating me occasionally of his progress.  Each time I asked him whether he wanted me to take a look at what he has done, he said, "No, thanks.  I'm doing fine."  With that, I left him to it as I didn't want to spoil his fun by making the process overly structured, as often happens when this Mum takes over.  However, last week he suddenly invited me to work with him on one of his stories (apparently he is working on three different stories concurrently).  Yay, partnership writing minus the instigation on Mum's part!

While I have a copy of Partnership Writing that is full of great ideas to be used to help children in the writing process, the let's-sit-down-and-write-something approach has never worked with Tiger.  He's not even keen about Friday Freewrite as an introduction to writing.

Regardless of how interesting an activity is, if it is assigned by Mum, Tiger instantly sees it as a task, i.e. something to be completed that he hasn't necessarily chosen to do for and by himself.  Most of the time he does well to complete the tasks diligently but being dutiful is not the same as being on fire.

“When you take the free will out of education, that turns it into schooling.”

When Tiger extended the invitation to me last week, I almost couldn't believe it.   I'm not exaggerating when I say it feels like a once-in-a-lifetime opportunity (to me).  What do you do when the opportunity of a lifetime comes around?  I drop everything else and run with it.

We were out last week so we didn't get to sit at our desk until yesterday.  When Tiger reminded me that he wanted us to write together, I let go of the one million other homeschooling tasks I had planned for us to do.  Instead, I let Tiger take charge by asking him to share how he envisages our partnership writing to work.  He had a few good ideas, so we brainstormed for a bit and bounced our ideas back and forth before deciding that we would work together by writing one sentence each in an alternating manner. 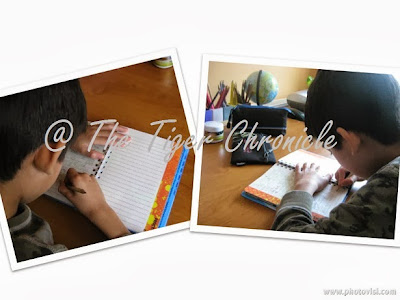 The story prompt that Tiger chose was about tarantulas escaping from a tarantula farm (remember, the book is meant for boys).  There was a lot of laughter as we passed the book to each other, taking turns to write the next sentence.   Since the writing was done in a very relaxed manner -- laughter is a great relaxant -- Tiger even asked me for suggestions to improve his sentence structures and the way he conveys his ideas.  Under normal circumstances, he would have been too defensive to even listen.  It just goes to show that children learn best when they are happy and relaxed. 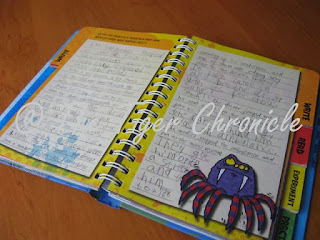 It took us a good part of yesterday to complete our three-page story and Tiger is keen to write the next story in a similar way.  Even though we did not get much else done yesterday apart from writing, I'd say that it has been a successful day.