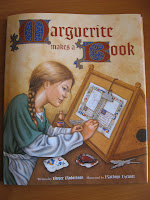 We are currently working through Marguerite Makes a Book.  This book has been chosen because:
1) the story was set in the Middle Ages;
2) we wanted to learn more about illuminated manuscripts;
3) the lesson plans are available free from here.

While the unit study approach appeals to me for its wide coverage of topics based on a single source book, I was not sure whether the lapbook aspect would appeal.  We made a few lapbooks in Tiger's preschool years and I thought they were too much trouble to make since I was the one doing most of the cutting and pasting back then.  This time round, I approached the lapbooking slowly so as not to overwhelm Tiger with the amount of work involved.  Surprisingly, this time Tiger took to it like a fish to water!  I think the success with lapbooking this time is due to the following factors: 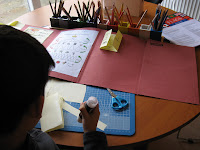 1) Tiger being more developed in terms of fine motor skills so cutting and pasting do not tire him as much as they did when he was little;
2) Instead of putting the lapbook together in one go, as I did before, we put each part together as we worked through the unit.  This way, the project became manageable components rather than an overwhelming whole.
3) Tiger has been more involved this time in terms of designing and organising the lapbook.  After I explained what the lapbook templates were for, he had full control over the project.

So far so good.

Working slowly through the unit, we have touched upon geography when we had to find out the meaning behind the flag of France. 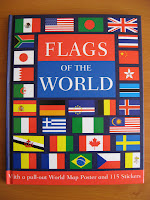 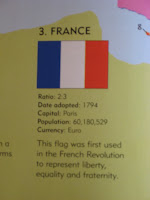 An interesting discussion came up when we examined the feudal system as part of understanding how society was structured in the Middle Ages.  Using the diagram, Tiger finally had a visual understanding of where knights were placed in the social hierarchy.  That led to us examining how and whether social structure has changed as much as we would like to believe.  It was slightly grim when we realised that we were just a little better than the peasant class.

Peasant or not, we moved along to appreciate great art in the form of a child-friendly version of the Book of Hours.  The stunning illustrations were done by the Limbourgh Brothers, whom we had studied previously.  The book gave a detailed description of each illustration, which helped us appreciate the artist's skills and use of symbolism.  We also looked at each picture to find details that we had missed when we studied the artist in Year 1. 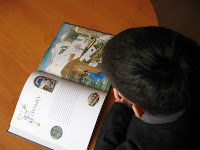 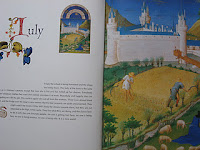 After reading through the book, I took out the copies of art postcards that we used in Year 1 for artist study.  The cards were used to match against the pages from the book. 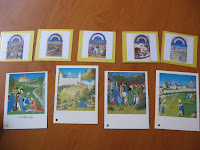 We both watched an excellent interactive demo of how a medieval manuscript is made.  The demo helped to cement what we know so far about the manuscript process.

Another superb example of medieval manuscript is the Book of Kells which is currently held in Dublin:


Compared to filling out workbooks, this approach takes a long time.  We seem to get side tracked at every point as we follow our interest before returning to the lesson plan.  So far we are still working through Chapter 1 but the process of learning has been immensely enjoyable, especially when we are being led into fascinating areas which would otherwise have been missed.  If we were just using this approach for Language Arts, I would be worried about whether Tiger is covering enough grounds for his basic skills such as grammar, writing and spelling.  Since those areas are being covered at other times in our week, we can indulge ourselves by taking an interesting route to reading and literature.


This post is linked up to several blog hops, where you can visit to see what other homeschoolers have been busy with.  It is also linked to the Homeschool Showcase #93.