An unschooled week: War and Peace (part 1 of 2)

This week is a little experimental week for us.  At Tiger's request and also out of my own curiosity, we have been trying out the unschooling approach this week to see how and whether it would work for us.   After a few conversations with Tiger about his behaviour in the past few weeks, I sensed that he is now ready for more autonomy to direct his course of study.  Although he is not ready to be fully independent in his work, he would like to have a partner in his discovery rather than a 'teacher'.

At the beginning of the week, we agreed that this week I would support him in his learning as he took charge of it himself.  I would neither set any time limit on his activities nor tell him what to do or study.  I did wonder whether we would end up with a week of him not wanting to do any academic work but just play all day.  It has turned out to be a pleasant surprise for me.

War
For the first half of the week, Tiger spent his time learning about his favourite topic: war, weapons, troop formations and strategy.  By his own initiative, he read the following books from the bookshelf: 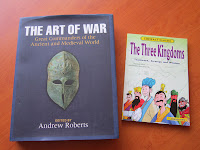 He then compared what he had read with the information in The Kingfisher History Encyclopedia, then informed me of the discrepancies he found.  He then wanted to review the various significant battles of the ancient world so we watched them together before discussing the different strategies used in the various battles that determined their success or failure.  It was a 'review' because we had studied these battles last year in Ancient History. The ancient battles that Tiger chose to review are listed below:

1) The Battle of Salamis


Many 'war plans' and troop formations were then drawn up and reenacted using model soldiers, based on the different strategies Tiger has seen from the documentaries.  Further discussions with Tortoise in the evenings led to modernisation of the warfare, moving us into the era of World War 2 and beyond.  This sparked Tiger's interest in making paper aeroplanes with different designs, figuring out why certain designs worked while others didn't, reconfiguring and remodelling more aeroplanes (our recycling bin is full of unsuccessful designs) until they worked.  For a boy who would have avoided a formal session of origami at all costs, Tiger's enthusiasm and persistence in folding and refolding about 20 different aeroplanes of his own designs was a sight to behold.


I suspect the fact that we happened to pass by a military airfield and seeing the take-offs of a few F-15s this week helped to fuel Tiger's interest in this area:


Yes, the first half of our unschooling experiment was all about war, but peace is just around the corner, as we shall see in part 2 of the post.


This post is linked up to several blog hops, where you can visit to see what other homeschoolers have been busy with.
Posted by Hwee at 3:55 pm