An unschooled week: War and Peace (part 2 of 2)

Peace
After a few days of thinking, reading and learning about war, Tiger decided to put aside his warring tactics and to spend some time concocting 'secret formulae' of some kind.  Instead of having him raid my kitchen cupboards aimlessly, I suggested that we consult the following book for ideas: 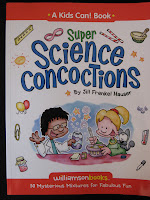 The book is actually chemistry-in-disguise!  Great!  The lessons are presented in a colourful, child-friendly way, with lots of hands-on experiments with a few straight-to-the-point explanations.  Just the right approach for us at this moment.

1) The very first experiment we made was a garlic oil salad dressing.  There is certainly lots to be said about kitchen chemistry as the process of turning raw food into cooked meals is full of chemical reactions, but we'll just start with the simplest, most easily observed change. 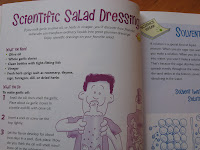 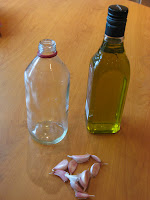 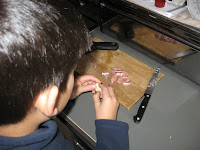 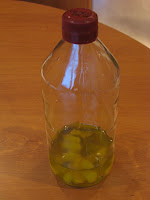 Following the success of our previous experiment, Tiger was keen to carry on.  He read through the book by himself and chose the experiments he wanted to do in no particular order.  The only condition I gave him was that he had to complete all the (2 or 3) experiments in one topic before moving on to the next topic. 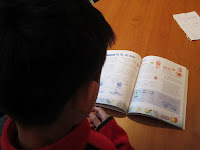 2) Next up was an investigation into the relationship of temperature and density.

2a) We first looked at the how warm air rises by observing smoke rising up from a rolled up tissue paper.  Obviously Tiger had seen smoke before, but this was the first time we thought about this common occurrence in terms of molecules and density, so a good discussion took place about how heat "excites" air molecules, which led to them spreading further away, which in turn decreased their density, which caused the warm air to rise 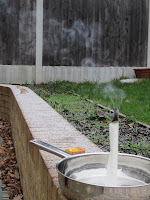 2b) The same phenomenon was observed in liquid.  The first liquid experiment was one called "Two-Tone Tea".  First we poured ice-cold water to fill half the glass, then placed a slice of orange as a separator, followed by pouring hot tea into the glass. 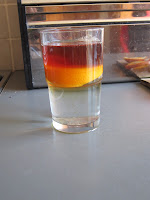 When the orange slice was removed, the liquids don't mix because of the huge difference in their temperature. 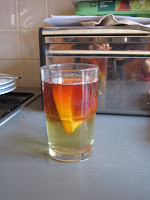 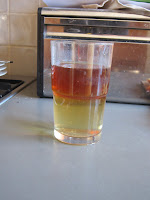 3) The next two experiments have to do with surface tension.

3a) First was the "Penny Challenge".  Simply put, the experiment got us to count how many pennies it took to make the water overflow.


3b) Next is a variation to (3a), in that we repeated the experiement but this time added a squirt of washing up liquid to the water.  The goal of this variation is to test whether liquid soap breaks the surface tension of the water by observing whether a bulge forms on the water's surface.
3c) "Challenge on a Penny".  This experiment was about counting how many drops of water one penny coin can hold, and observing whether a bulge of water formed on the penny.


It has been a productive and fun week with lots of engaged learning.  Tiger is keen to have another unschooled week but I am very aware that we are not doing much of 'basic skills' such as grammar, which I happen to think is very important.  While I acknowledge the importance of being flexible and following the child's interest (which has proved to be a success this week), I also want to make sure that Tiger has his foundational skills well established.  After all, without the previous year's exposure to ancient world history, I doubt Tiger will gain such intense interest in ancient warfare and related topics on his own.  I think we will meet each other halfway: we will continue with what we are doing in terms of academic approach, with an unschooled week thrown into the mix every few weeks.  Hopefully this will path the way for Tiger to gain more independence and control over the direction of his learning over time, while giving me the peace of mind that he is covering all the fundamental building blocks of learning.


This post is linked up to several blog hops, where you can visit to see what other homeschoolers have been busy with.
Posted by Hwee at 12:25 pm