Finishing Up the Hound

When we started looking into the Sherlock Holmes series, I used the related Boomerang back issue of The Hound of the Baskervilles to get a little more out of the story than just reading it for fun. 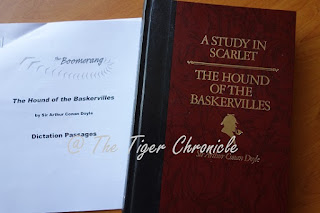 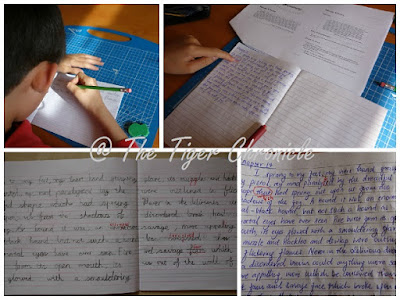 The way we did it for the first three weeks' dictation was to have Tiger read the passage out loud to me twice before I recite it back to him.  The rule is that I could not start writing until I could recite the entire passage without any error.  This proved to be much harder than I had originally anticipated it to be.  It took me several attempts before I could start writing the passage down.  Even so, I still managed to get a few errors in my dictation, which Tiger was only too glad to point out.

By arrangement, I always did the dictation first.  This was to give Tiger the time to listen to and memorise the dictation passages while I struggled through mine, so that by the time it was his turn to write the passages down, he was able to memorise entire paragraphs with very little problem.  Given the length and difficulty of the passages, I think this is a fair way to encourage a child to complete a task that would otherwise seem insurmountable. 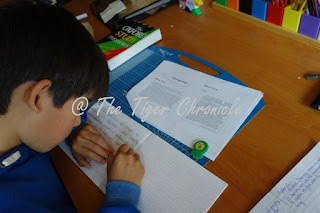 When we came to Week Four's passage, I decided that it was just too long to even try to do a successful dictation of it at this stage, so we used the passage for copywork instead.  Tiger does all his dictation and copywork in the handwriting exercise books where he can practise his penmanship at the same time.

While the passage in Week Four concentrates on the description of the hound in the story, we did a little research to establish what kind of hound it was and came to the conclusion that it would have a cross between a bloodhound and a mastiff, which can be a rather frightfully vicious dog, especially when it was painted with luminous paint, as in the story.

To spare us from having nightmares about being chased by luminous-coated mastiff-crossed hounds, Tiger decided to end the study by making his own stop motion animation version of the scene that we had just studied, using paper cutouts as his back drop for the moors, plasticine for the hound, and an unfortunate LEGO man for the victim. 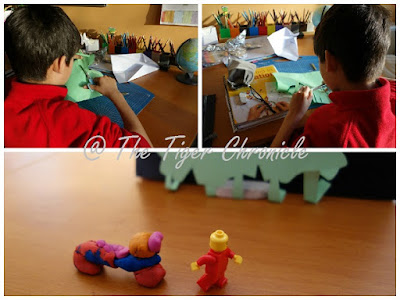 I won't mind running into Tiger's colourful version of the hound.  It seems harmless enough and does not even have teeth, and it reminds me of a soppy St. Bernard which, incidentally, is from the mastiff family!