The Italian Experience - The Tempest

The Tempest is Shakespeare's final play, making it a mature, complex, and highly symbolic piece of work.  It was also the theme that was used in last year's summer Olympic games opening ceremony.  We have been studying The Tempest as part of our Marco Polo study for its connection to Milan.

The way that we have prepared to study this play is a combination of: 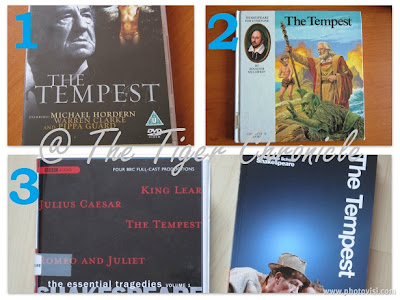 As a genre, Shakespeare's work is best learned in the way that it was intended: as a play.  While reading the script is one way to analyse the literary elements of the play, the most memorable and engaging way for children to experience Shakespeare's work is through acting/drama.  If that is not possible, the next best way to learn is to listen to the play, rather than reading it.

It is difficult to find good Shakespearean classes for children so when one of the homeschooling groups that we belong to offer a 4-day course on The Tempest, led by an experienced actor who is also a literature teacher, we jumped at the chance to participate in it. 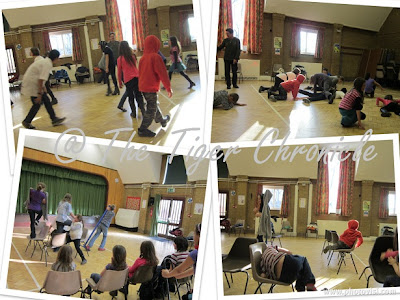 In Workshop 1, the children started with drama games to help them relax, get acquainted with one another, and to get used to the different drama terms such as 'neutral position' which means to be ready for instruction or action.

This was followed by a brief introduction to the history of drama, in which the drama coach told us that Shakespeare was inspired by the commedia dell'arte characters.  The children were also introduced to the different "levels" in acting, which they learned to convey using different body positions.  Another technique that the children learned was using their facial expressions.  For example, they were challenged to express 'innocence' through their eyes, face, cheeks, mouth, movement, then finally in the ways in which they interacted with the space around them.

The next half of the workshop concentrated on analysing Act 1 Scene 1, which involved a few rounds of discussions about the shipwreck scene.  After that, the children worked in several groups to turn themselves into the ship, and they had to convey the shipwreck using movements. Workshop 2 again started with drama games that helped to enforce the ideas of relaxation, cooperation and teamwork.  This was followed by a review of Act 1 Scene 1.  This time, the children were led into an analysis of the characters and the scene.  For example, the children were asked to discuss the significance of the play as Shakespeare's final work, the possibility of it being used as an autobiography via the character of Prospero, the use of symbolism, and what Shakespeare's message to the world (through this play) might be.

The focus of Workshop 2 was on Act 1 Scene 2.   Analysis of the scene included discussions about:
After this, the children worked in groups of four to create the character, Caliban.  They were to show, through working together and body movements, the character emerging out of the earth. 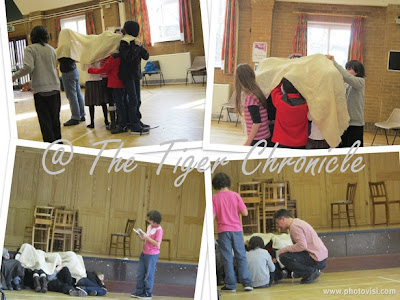 The children worked on Act 2 Scene 2 in Workshop 3, focusing on the characters of Caliban, Trinculo, and Stephano.  In groups of five, the children were given the task of creating Caliban with multiple heads and legs under a piece of cloth.  To do this, they had to consider the characteristics of the character -- earthy, heavy movement, type of voice, it being half-animal and half-human, etc.  When they have developed their character, each child was given a line (Caliban's curse of Propsero) to add a voice to the Caliban that they have created.

The scene analysis in workshop 3 included: 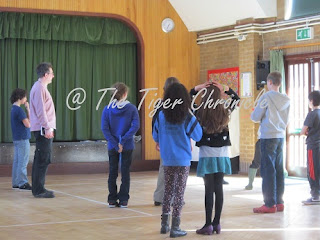 The final workshop focused on analysing Act 3 and on understanding why Shakespeare has set the play on an island.  Specifically in Act 3 Scene 2, much time was spent on dicussing and analysing Caliban's speech:
The discussions on Caliban led to the children thinking about how the settings of the play might have been related to the slave trade that took place in Elizabethan times, that perhaps Shakespeare intended the audience to consider what would happen if you treat other people as sub-human (as in the case of how Caliban has been treated).

In doing so, the children had to analyse the body language of the statue that they were to represent with their bodies, while also analysing why the two humans may want to help Caliban.  It was interesting to see the many different, creative interpretations of the same speech. 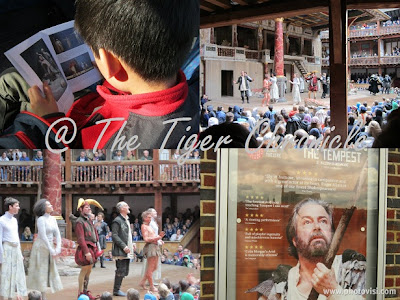 It is all very timely because the new 2013 season has opened at The Globe and we went to watch The Tempest there.  You can catch the final moments of this year's production here.