Following our very successful first poetry tea last week, Tiger has been looking forward to this week's tea time.  He has even volunteered to bake something new this week. 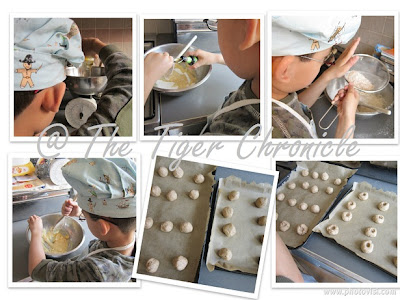 Tiger has been baking since he was three years old but not on a consistent basis, only because we didn't have a good reason for him to feel motivated enough to do so consistently.   Now the weekly poetry tea seems to have sparked a new interest in baking for him so I am more than happy to have him spend time in the kitchen to learn the important life skill of cooking. 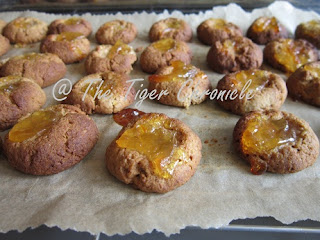 We had to be out on the day that we were scheduled to have poetry tea but Tiger was adamant that he didn't want to miss it, so I packed a handful of jam drops in a lunch box and a poetry book into my bag.  True to his word, Tiger and I spent 45 minutes in a cafe having our version of poetry tea.  We applied the same process as we would have done at home, i.e. taking turns to read verses out loud while the other person was eating.

There was nothing exceptional about what we did except that a French family (a couple with two young children of about five and seven years old ) sat at the table next to ours.  The tables in the cafe were placed very close to one another so they could hear and see what we were doing, and vice versa.

Because we were using Tiger's favourite poetry book at the moment, Edward Lear's Nonsense book, Tiger read page after page poetically and very animatedly before writing his own verses in his sketchbook when it was my turn to read. 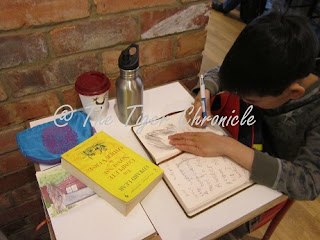 I noticed the French mother listening to us and looking at us several times throughout our reading, then signalling to her husband and her older daughter to look at us.  Tiger was oblivious to it all but I felt slightly self-conscious to be stared at.  I have no idea what the French mother was thinking of but at least she didn't give me the disapproving, what-a-pushy-mum look so I assumed, from her facial expression, that she was impressed by what she saw.

This incident reminds me of a minor national outrage that took place last year caused by a caricature piece of writing that pitted stereotypes in French parenting against those in English parenting.  If Tiger and I had swayed the French mother's opinion to the positive about English children's behaviour in public, then we have done our part for England that day, not that we would ever claim to represent anybody but ourselves....