The Italian Experience - The Most Famous Love Story

Tiger has already read the story from Tales of Shakespeare and other abridged versions.  He also remembers the masks that he decorated, which he thinks will come in handy in the masquerade party in the play.  He also watched the BBC animated version of Romeo and Juliet.


After our previous successful trip to The Globe, Tiger asked to go there again.  On his own accord, he started to read the original play at home and took it along on the day of the performance to "match what the actors are saying with the script" (his words).  The version that he read is one that is used in schools -- with the dialogues on one side and the corresponding analysis on the other.  I wasn't expecting him to read the actual play until later, but if he wanted to do that and has enjoyed doing so (as he told me afterwards), then I won't hold him back unnecessarily. 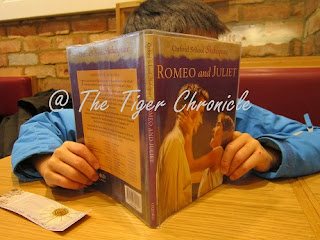 The production at The Globe that we watched was one that was specifically put up for the benefit of students who are taking literature GCSE exams this year, as Romeo and Juliet is one of the selected texts for the exam. 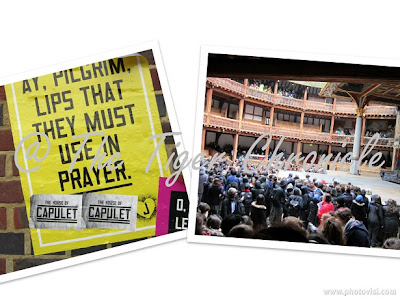 The performance, although the actors still spoke in the original Shakespearean language, was modernised in its props and costumes, which reminded me more of West Side Story than the usual Elizabethan stage than we were expecting to see at The Globe.  It is very unusual for The Globe to perform in a modern version so I wonder whether it was a deliberate action to get the secondary school children interested.

I was very impressed by the performance nonetheless, as I felt that I now understand the play and the emotions within the characters more after watching the performance.  However, Tiger didn't like the modernised parts of the performance.  He wanted to see the traditional Elizabethan version that The Globe did a few years ago:


Tiger was also not impressed with the audience that day.  Compared to the very civilised, interested, paying public whom we sat amongst to watch The Taming of the Shrew, this time we were amongst secondary school groups.  Watching from the side where we were sitting, it was clear that some of the school children / teenagers really didn't want to be there.  Tiger was slightly baffled at one point by the disinterest he saw in the majority of the school-attending audience.

The quality of the audience and the modernisation of the play, both of which Tiger didn't take to, helped me make up my mind about not attending school matinees at The Globe anymore.  I would rather pay the full price to have the same experience as we did with The Taming of the Shrew.