As part of our geography study (via Marco Polo) these days, we have been paying more attention to the various geography terms such as 'peninsula', 'island', 'bay', etc.  While we are still in Italy in our study, we have come across these terms as they apply to the various parts of the country.  For example, the mainland of Italy is a peninsula, while Sicily is an island, whereas Naples is situated by a bay.  I thought I could get away with a quick review using an exercise from the Great Map Games book, but I soon realised that Tiger could do with a better understanding of the difference between land forms and water forms. From his Montesori preschool days, I recall an exercise that will teach this concept in a tactile manner.  Now that Tiger is older and more capable of creating materials for his own use (as opposed to his preschool years when I had to make most of the Montessori materials), I printed off the freely available Land Form Cards and explained to him that we were (mostly he was) going to make 3D models of those land and water forms.  Tiger has always been enthusiastic about clay modelling, so he was happy to take on the project.

The bag of Sculptamold that had been sitting in the cupboard for a few years finally saw the light of day!  In its dry form, Sculptamold is very much like shredded paper pulp.  After adding water and mixing it well, following instructions on the bag, it becomes very clay-like yet much more malleable. 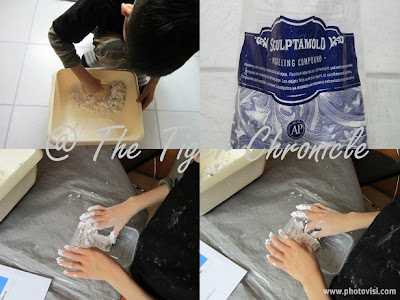 It didn't take Tiger too long to complete the ten models.  We waited 24 hours to let the clay dry completely. 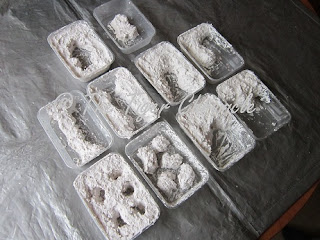 The following day Tiger painted the models with acrylic paint.  We left the models to dry for another two hours. The real fun began when the models were completely dry.  Using a jug of water added with blue food colouring, Tiger poured carefully into each tray. The strong contrast in colours between the land (brown) and water (blue) makes it very easy and clear for the child to distinguish between land forms and water forms.  Therefore, Tiger had no problem to identify them correctly with their corresponding nomenclature cards. 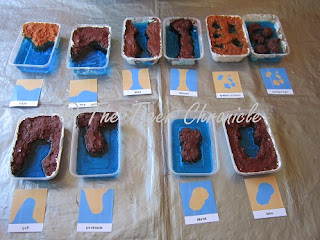 I was wondering whether there was any need to extend the activity when Tiger suggested that he wanted to try to identify the trays while being blindfolded.  This way, he would only rely on his sense of touch in the identification process. 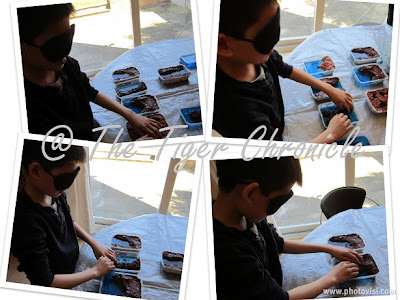 After Tiger called out the correct names for each tray several times, I changed the game a little by reading out the definitions of each land/water form instead.  Still with his blindfold on, Tiger now has to: (1) identify which land/water form matches the definition that I give, and (2) find the corresponding tray by touch.  He did well to identify them all correctly. Tiger must have done the identification game at least five times in a row.  I think by now he has a pretty good idea about the ten common land and water form, if their physical forms were not already etched in his mind.  He was having so much fun that he didn't want the exercise to end, so I printed off additional definition cards, mixed them up with the other two sets of cards that were used earlier, and asked him to categorise and label everything. Tiger had to do the exercise on the floor as there were too many labels and trays to fit on the table.  Here is a close up of his floor work: 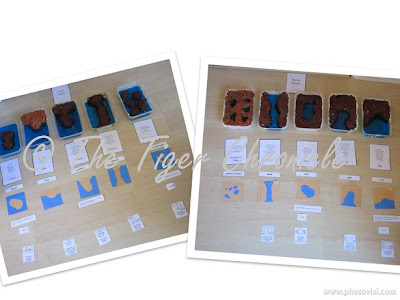 Over the next few days, Tiger was out in the garden most afternoons, mostly digging on his patch. 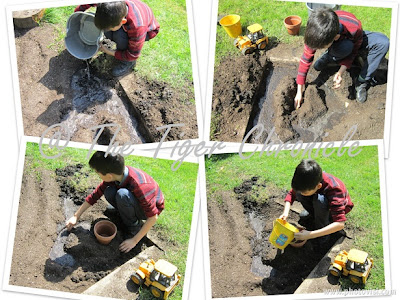 When I went to see what he was doing, he showed me the archipelago that he made: On another day, he was again found digging on his patch with intense concentration: 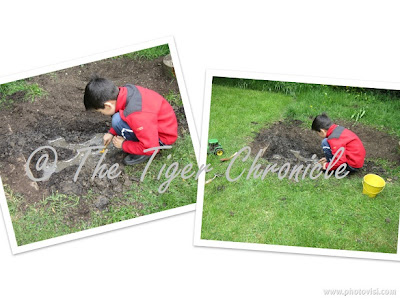 When I went near, he told me that he had been creating a peninsula and an island: 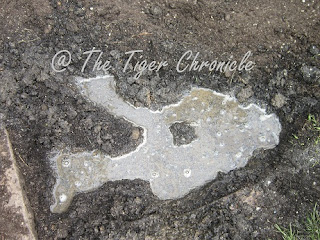 Given a choice, I personally would much rather see my child demonstrate his knowledge this way than by taking a paper test.  I sometimes get asked the question "How do you know that your child is learning?"  My answer has always been that I know from observing his behaviour and attitude, from listening to what he tells me, and from looking closely at what he does.  The above is an example of how I know that he has internalised what he has learnt.

Having said that, we still used the command cards for a thorough review.  The majority of the questions were answered orally with Tiger using the globe to find his answers. For my own peace of mind, I asked Tiger to: 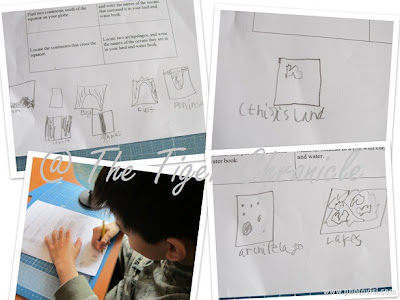 This post is linked up to:
1) Look What We Did!
2) History and Geography Meme: Learning History and Science Together
3) Hobbies and Handicrafts - May 17
4) Collage Friday - Math, Appliances, and Other Goodies
5) Weekly Wrap-Up: The One Where I Didn't Go to Nashville
6) Science Sunday: Tiger Hunt
7) Hip Homeschool Hop - 5/21/13
8) Homeschool Science Share & Tell - May 2013 edition