As we move closer to the late Anglo-Saxon period, ie about 300 years after Alfred the Great's death, we get to know the decline of the Saxon rule in England in the way they were less ready to fight the Vikings than before.  One particular king, Ethelred, seemed to have been gone down particularly bad in history, by being called "The Unready", although historians are divided whether that is an accurate translation of the Saxon title Ethelred was given.  Some historians think he should be more accurately called "The Ill-advised", given the circumstances surrounding his rule.

We went to another Saxon encampment (Tiger just can't get enough of reenactments) where they were recreating the year 1012AD.  We attended the court of Ethelred where we witnessed how crime and punishment were administered in three different cases: (1) a theft, (2) bearing a child out of wedlock, and (3) a neighbourly dispute. 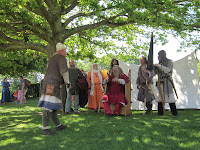 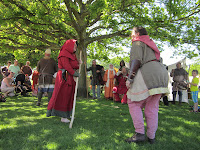 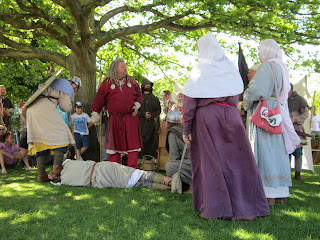 We had a lot of time to look around the encampment, to talk and listen to the reenactors about their roles, their displays, and the period in which they are 'living' in. 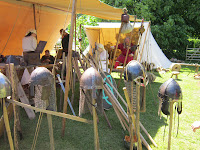 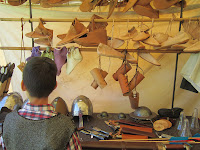 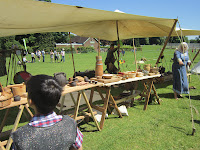 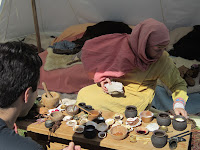 There was a children's vike where they were "trained" to fight against the adults, after a few simple rules and instructions.  Naturally, the battle was over in a few minutes with all the adult warriors being unceremoniously defeated. 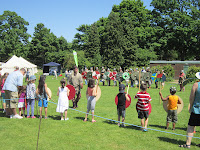 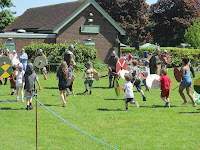 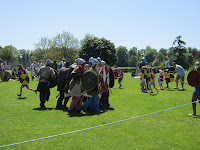 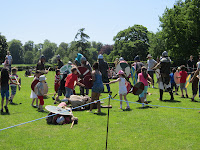 After a short rest, the adult warriors showed their true prowess by having a weaponry and combat display, which Tiger watched with much enthusiasm. 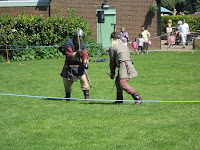 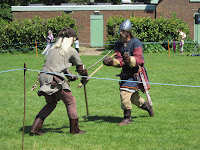 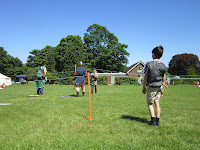 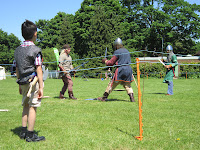 The finale was a huge battle between the Saxons and the Vikings, although you would not be able to tell who was who from the photographs, since their armour and helmets were so similar. 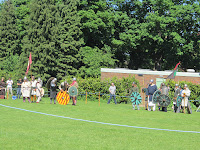 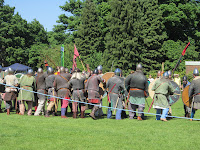 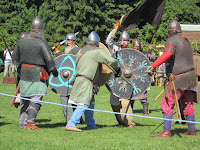 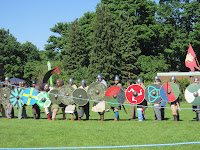 The turbulent late Saxon period finally came to an end with King Harold losing the kingdom to William of Normandy at the Battle of Hastings, the reenactment of which we attended at the actual site last October.  We have studied this event so many times before that it needs no further work, apart from the very glaring error we found in SOTW2 that really bothered us, which we feel we must point out here: we have never heard of King Harold being called "Harold the Unfortunate" by anyone in England, and there definitely isn't an inscription of this kind on his tombstone, see evidence below:

I think many English still regard King Harold as a tragic hero rather than simply an unfortunate king who happened to lose a decisive battle.  The circumstances surrounding the events leading up to the Battle of Hastings are much more complex than how SOTW2 has depicted them.  The way SOTW2 has oversimplified (and errorneously reported) events that we happen to be very familiar with makes us question the credibility of the book.  It is nonetheless useful for Tiger to acquire a healthy sense of skepticism to information presented by "popular textbooks" and "experts".