While things are pretty grim for the poor children (as we saw in part 1), the Victorian law did not treat kindly the working class adults either, it seems. 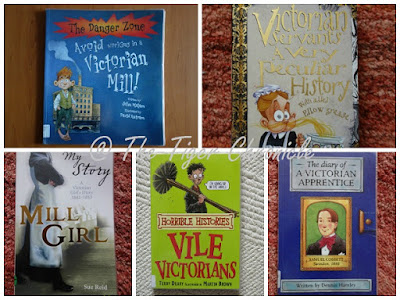 This time, we learnt about another Victorian trial, based on yet another real case, in the Ancient House Museum. 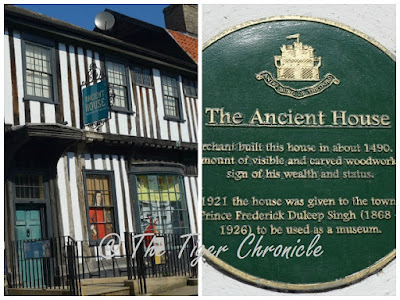 Before the actual case was presented to us, we were given a brief introduction to life (for the servants) in a Victorian household, which included a hands-on activity to make butter from cream demonstrated by the 'senior' kitchen maid, 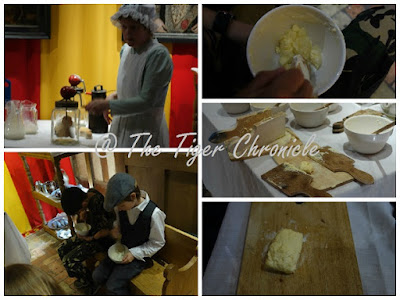 and a demonstration on how laundry was done by the 'junior' maid: 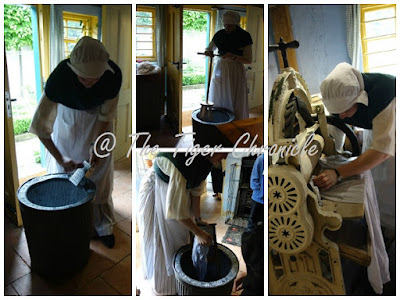 The children were also shown a number of items commonly used in a Victorian household which they had to figure out what those items were used for: 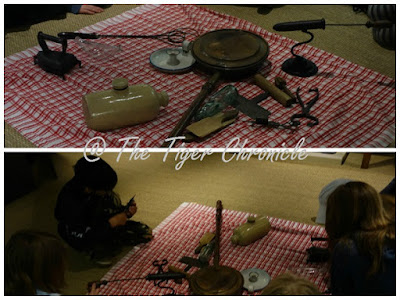 The above activities were to give us the context in which the case we were to encounter was set.  The four main characters involved in the case were: 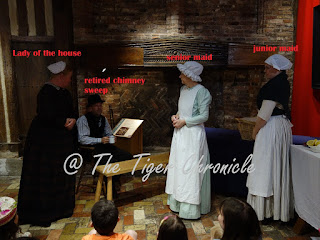 1.  the lady of the house - a rich widow whose son was the mayor of the town, and who discovered that one of her rings was missing from the mantle piece in her bedroom;

2.  the master sweep - a man who used to be a chimney sweep and who ran a business hiring out chimney sweeps.  He used to sweep the chimney for the house as a child so he knows the servants of the family very well.  He is going out with the junior maid and wants to marry her but he does not have enough money to do so.  He is known to have a drinking problem, and had been caught a few times for minor theft.

3.  the senior maid - who worked in the house for over 30 years, almost like a housekeeper.  She does not have a high opinion of the chimney sweep.

4.  the junior maid - a very young girl who has only started working for the family for a few years.  She has been seeing the master sweep for nearly a year and wants to marry him.

The case was presented to us in a drama/reenactment such that we were witnessing the scene as it unfolded (i.e. when the lady discovered that her ring was missing) and listened to each character's account to the policeman of where they were and what they claimed to be doing during the time up to the police being called to the house. 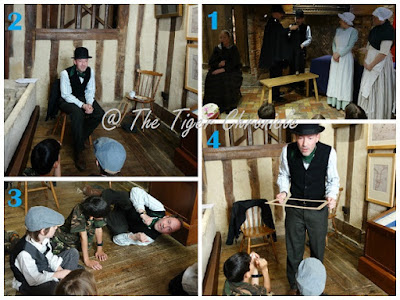 Unfortunately for the master sweep who seemed to be in the wrong place at the wrong time, and since he had no real business to be in the house other than to see his sweetheart, the junior maid, he was the instant suspect so he was apprehended by the policeman for having the ring in his coat pocket (photo 1) and was locked up in a cell as he waited for a trial.

While he was in his cell (photo 2) and had nothing better to do, he spent his waiting time telling us something about his background as a chimney sweep.  He explained how he had to get into tight positions when sweeping the chimney (photo 3) and that he could only do it up to the age of eight because he was getting to big by then to be able to get up the chimney.  He had a cutout cardboard frame that was used to measure whether a child would be suitably small enough to be useful as a chimney sweep (photo 4).  While all the children present had a go at seeing whether they could fit through the frame, only three or four of the smaller ones qualified.

When the trial was finally made, the judge listened to everyone's account and after some consideration, judged that the master sweep was guilty of theft.  Consequently, he was sentenced to ten years of hard labour, despite his vehement protest that he did not commit the crime.  This was the actual outcome of a real case that the workshop trial was based upon. 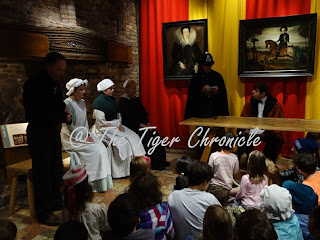 While everyone thought that was the end of the story, with most of us agreeding that the master sweep was indeed guilty of stealing the ring (based on his drinking problem, his past history of minor thefts, his desire to marry), we were told of what actually happened, which I find to be quite disturbing.

The master sweep was innocent!

What happened was that the junior maid had stolen the ring and slipped it into the master sweep's coat pocket without his knowledge.  Her plan was to have the master sweep find the ring in his pocket once he had left the house, assuming that he would then take it to the pawn shop to get the money necessary to marry her.

What she hadn't expected was for the lady of the house to be looking for that particular ring that morning (as the lady had many other rings to wear), and for the situation to spiral out of her control.  She kept quiet throughout the trial to save her own skin, and watched in silence as the master sweep was condemned to ten years of hard labour.

The records taken from the village's archives showed that, after the trial, the junior maid continued to work in the household for another few years before she married someone else and moved to another place.  Meanwhile, the wronged master sweep did indeed serve ten years of hard labour for a crime that he did not commit, after which he came out of prison a broken man and drifted from place to place without ever settling down at any one place for long.  He died after a few years out of prison.

I was shocked after being told the truth of what actually took place.  I am not sure what I am more disturbed by: that someone (the junior maid) could let an innocent man (someone she was going to marry!) go to jail on her behalf, or that I, along with many others in that workshop, was too quick to judge and was too sure of what I thought was right.  The thought of potentially inflicting injustice upon an innocent man is utterly mortifying.
Posted by Hwee at 10:44 pm