Following our recent study of Sherlock Holmes, Tiger and I decide to keep up the interest in all things mystery. 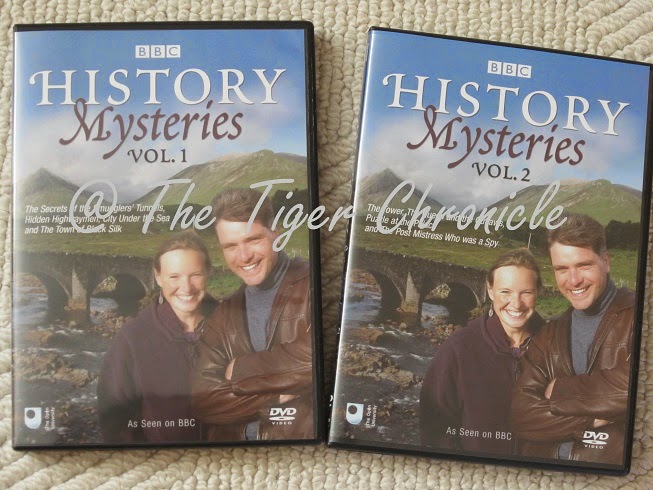 I chanced upon a company that sells various themed mystery/treasure trails around the country.  The trails look quite interesting and challenging, and appears to offer a fun day out, so we tried out the one that is set in Convent Garden area. 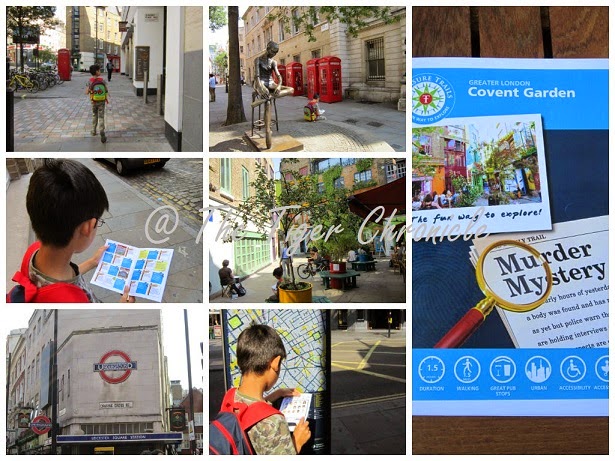 Tiger was keen to take the lead for solving the mystery.  The trail is designed such that we are only told the starting point (this particular trail started outside the Leicester Square tube station), and have to find our way around by following the clues given in each step of the trail, which are in turned only revealed when we solve each cryptic code accurately.  We thought it would be very easy, but we realised that we were totally lost after three hours of walking around the side streets and narrow lanes in the Soho/Convent Garden vicinity and finding ourselves barely halfway through our trail.  The guideline on the trail says that it should take 1.5 to 2 hours to complete the trail.  Ooops.

Feeling very hot, bothered, and utterly defeated, we gave up for the day and went home to rethink our strategy for solving the mystery.

We returned to complete the trail the next day, this time better prepared, both mentally and physically. 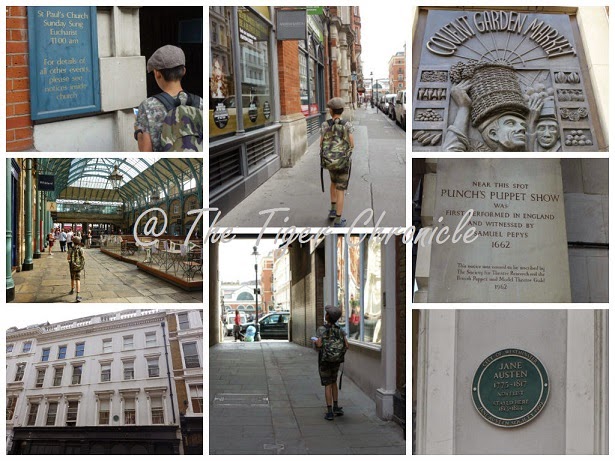 There must be something about wearing the Yorkshire flat cap that invoked Tiger's inner detective, as we were much more successful on our second attempt to complete the trail and hence solve the related mystery.  It took Tiger less than an hour to this time, and as we ended up in Convent Garden Market where there are many interesting sights to be seen, we spent the rest of the day congratulating ourselves for being super sleuths and rewarding ourselves with fantastic food found in the market.

Encouraged by our success at the Convent Garden trail, we then spent another fun day solving a second murder mystery, this time at Bankside.  I chose this location thinking that we would have a greater success because it has a shorter completion time of 1.5 hours, and that having been to that area many times we ought to know most of the places there.

Not wanting to take any chances this time, Tiger started studying the trail and working out the most efficient route once we got on the tube to get our first destination. 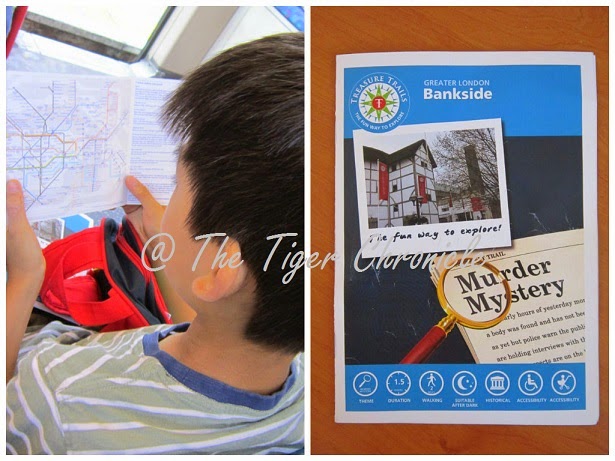 Our starting point this time is outside the London Bridge tube station, near the Southwark Cathedral.  This proved to be very interesting for me because we had mostly hung out on the St. Paul's Cathedral side of the river, so starting the trail from Southwark is an opportunity for us to explore a few new places. 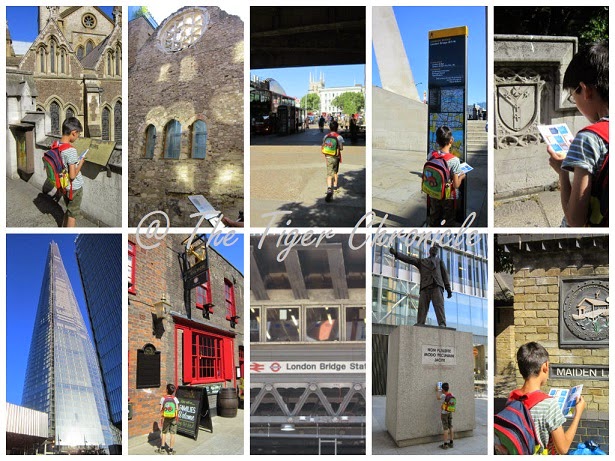 And exploring and discovering new places we certainly did!  The trail took us through many significant, new-to-us landmarks that we did not know about or had not visited before.  Seeing new places is always exciting, especially when it is done in conjunction with delicious food, as we found when we were led to Borough Market. 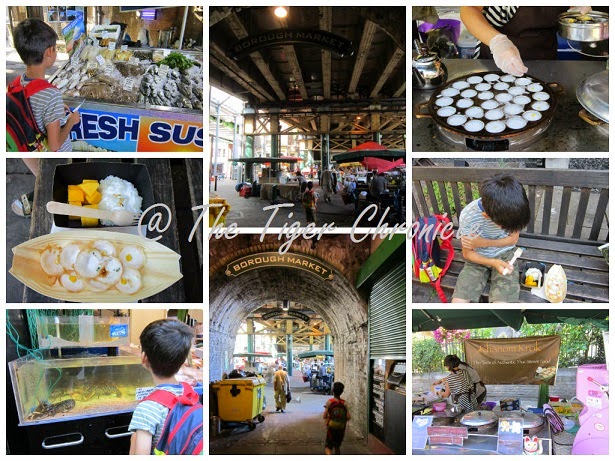 It was Tiger's first visit to Borough Market, and the sights and sounds of the market fascinated him.  More importantly, we found a stall that sells Thai desserts and mango sticky rice which we both love to eat!

The trail gradually led us towards the side of the Thames that we are more familiar with, whereupon we walked past the Clink Prison Museum and Tiger wanted to go in to take a look. 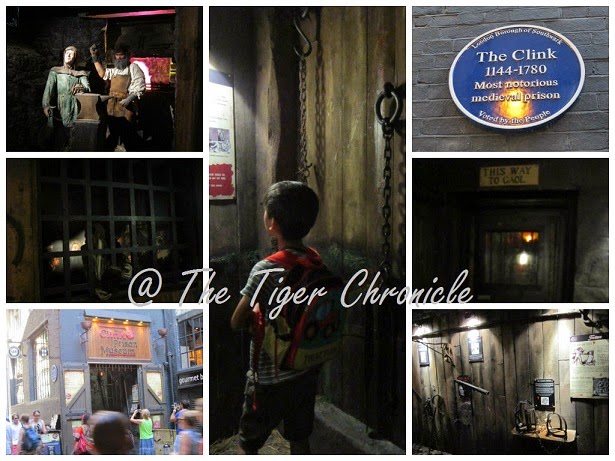 I knew about this museum but did not take Tiger here for a visit when we studied Medieval England because I thought: (1) it looked more like a commerical attraction than a real, historical accurate museum, and (2) the content may be too gruesome and hence inappropriate for a young child.  However, I was pleasantly surprised to find that not only are the exhibits and artefacts historically accurate, the representation of this gruesome aspect of medieval history is not unnecessarily gory.  Tiger was fascinated by the exhibits, while I was slightly appalled by the inhumane use of certain instruments of punishment.

As we approached the end of the trail, we were brought to 'theatre-land' (at least in Tudor/Elizabethan times) and came upon the original site of the Globe Theatre, which was burned to the ground.  Although Tiger and I have visited the current Shakespeare's Globe theatre many times in the past, we have not been to the original site until now.  It is interesting to see that the site is now part of a compound inside a housing estate.  Not far from it stands the Rose Theatre, which was the first purpose-built theatre on Bankside (predating The Globe Theatre) in Tudor time. 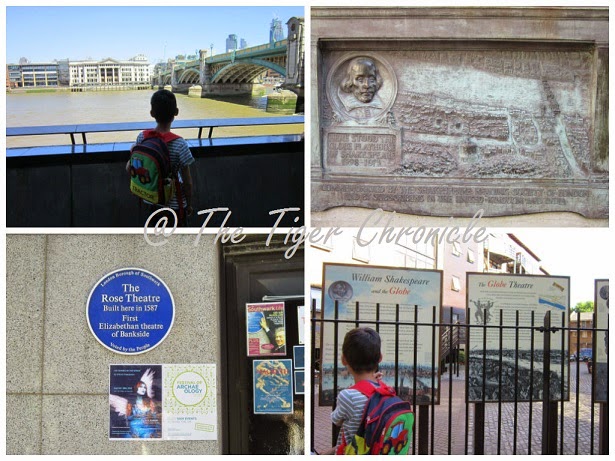 We walked the trail at a very leisurely pace, so it took us nearly a whole day to complete it but we stopped and enjoyed our discovery of many previously unknown-to-us places as the clues took us down side streets or made us look closely at certain architectural and historical features along the way.