How to Be a Narcissist

Although I have had some run-ins with a few narcissists in the past, I don't teach or encourage people to be dysfunctional.  This post is really about the next flowering plant Tiger and I studied together: the narcissus family which consists of the daffodil and the jonquil. 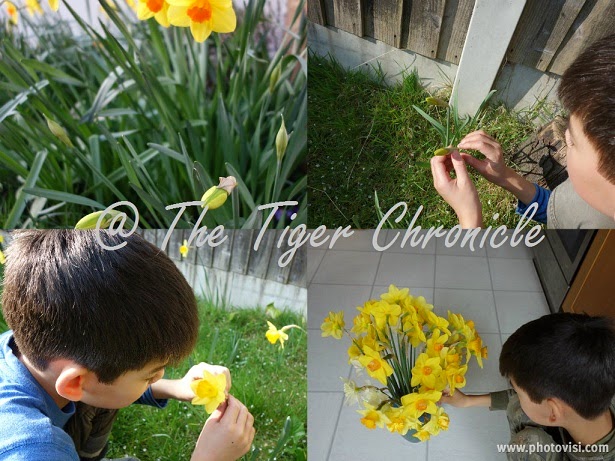 We used pages 549-552 of the Handbook of Nature Study to guide our observations. 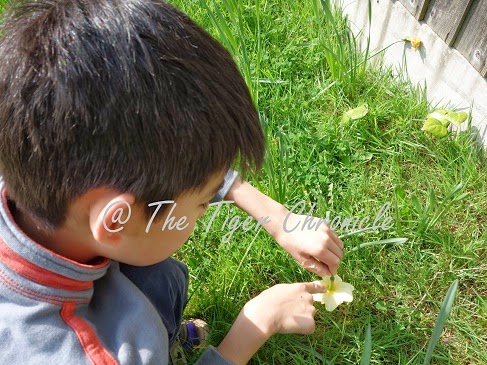 The interesting part about nature study is that we learn to closely observe objects that we often take for granted.  For example, prior to studying the narcissus family so closely, we thought there are only different-coloured daffodils.  Little did we know that, at a basic level, the daffodil family consists of:

1) the 'normal' yellow daffodils that we often see -- either the smaller wild one, or the bigger garden-cultivated ones; 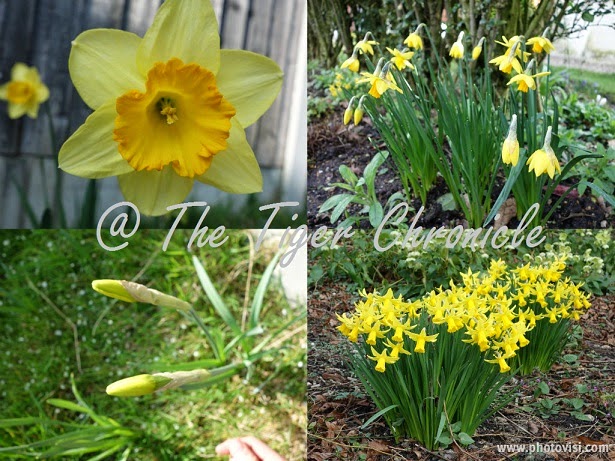 2) the mutant daffodil that has two or more layers of petals; 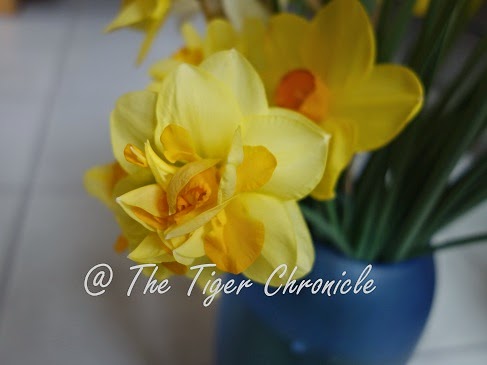 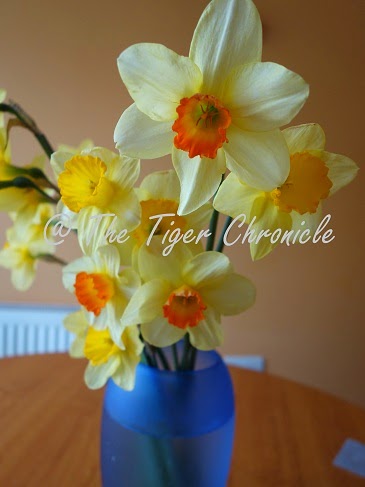 4) and the jonquil.  Funnily enough, Tiger and I had never thought of looking for the jonquil until we read about it in the Handbook of Nature Study.  We were very excited when we spotted them in somebody's front garden one day. 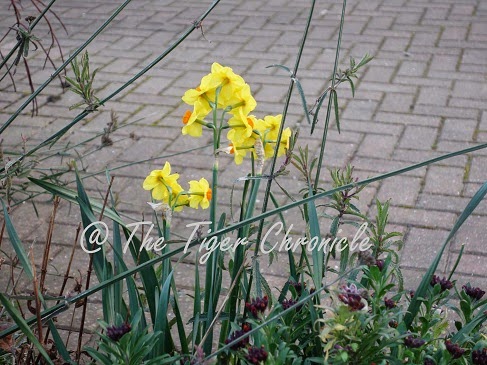 As we looked closely at the flowers, we noticed that the ovary of the flowers that had withered in our vase had swollen up to a size that was not observed in those that were left in the garden. 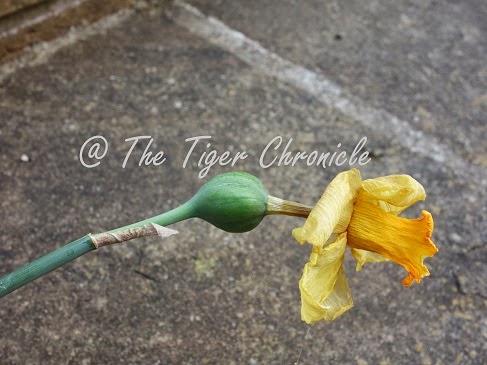 We are not entirely sure why the swelling occured but we think it was caused by self-pollination (since there are not insects in the house to facilitate cross-pollination) which resulted in the maturation of the ovules.  We then made a cross-section cut of the ovary to observe the triangular compartments that contain the rows of ovules. 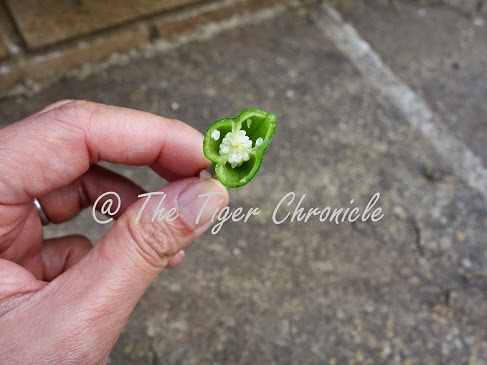 After that, Tiger pulled the flower apart to look inside.  He discovered some liquid at the base of the style, just above the ovary and wondered whether it was nectar.  Both of us scrapped the liquid with our fingers and tasted it -- it was sweet!  Nectar! 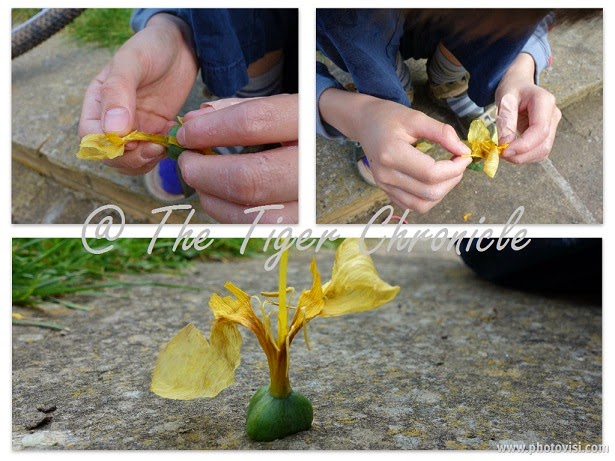 It suddenly occured to me to ask Tiger whether he knew the Greek myth of Narcissus, who gave his name to this family of flowers that we were studying.  He said no.  Gasp!  I distinctly remember Tiger becoming somewhat of an expert on the Greek Myths in Year 1 after we spent a few months studying the topic, but I appreciate his honesty at admitting that he is not entirely sure about the subject.  As far as I'm concerned, it is better to acknowledge our ignorance than to pretend to be an expert when we really don't know something well enough to call ourselves that.  As part of his growing self-awareness, Tiger is learning to know what he doesn't know and be comfortable at acknowledging that to himself and to us.  Not knowing something is not a problem -- all we have to do is to get a quick review by listening to the story followed by watching a clip:


Along the way, I also realised that we had not formally learn the scientific names of the flower parts, so we watched the following clip:


I also printed off the Parts of the Flowers cards set and used it as a learning tool.  Being designed in the Montessori fashion, the cards set is very useful as a set of nomenclature to introduce, isolate, and reinforce learning about the different flower parts. 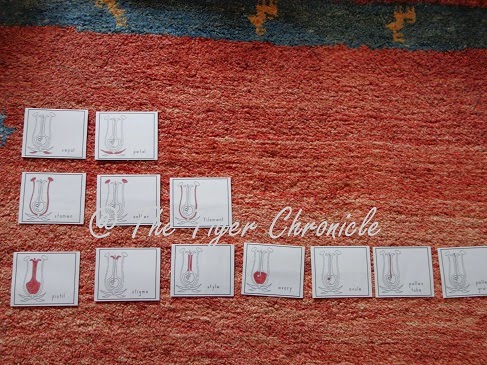 The set also provides opportunities for matching names to parts, as well as matching names to definitions, all of which reinforces the intended learning.  There is also a small booklet in the set that provides a summary of the reproductive function of the flower.  After reading it, Tiger identified a small error on page 3 of the booklet that needed correcting: where it is written "Pollen from the anther collects on the stamen.", it should be "Pollen from the anther collects on the stigma." 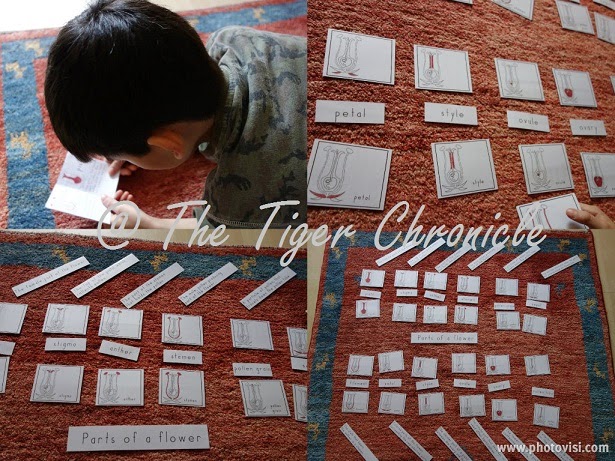 Labeling the flower parts in a diagram summarised everything we learnt in this session: 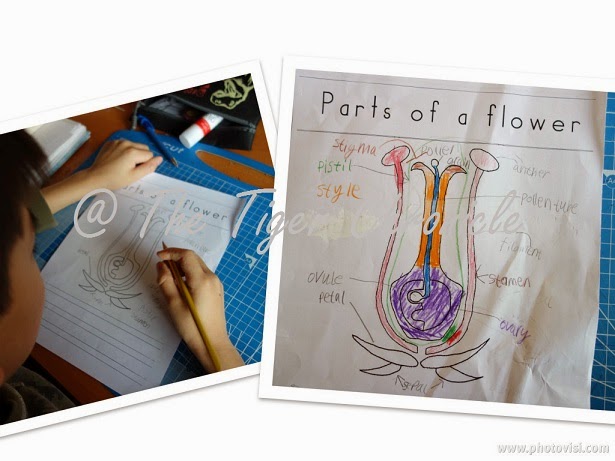 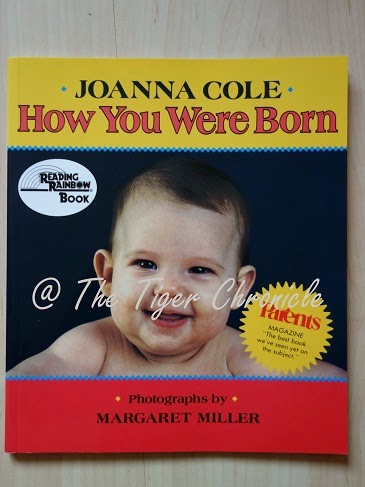 This took us off our flower trail for a little while as we spent some time discussing the similarities and differences between: 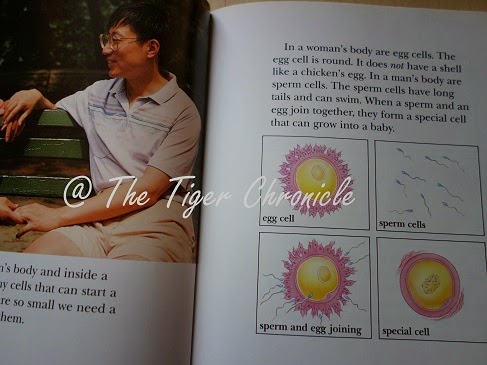 Who would have thought that a study of flowers would lead to a study of the human reproductive system?  Such connections certainly would not have been made in the school curriculum.

We then decided to dissect the flower to see the various parts for ourselves.  In our effort to be a little less amateurish in our scientific pursuits, we watched the following clip to make sure that we dissected the flower properly:


The dissection video got Tiger so interested that he decided to take down notes on his computer while watching the clip.  It was interesting for me to see Tiger starting to develop the skill of note-taking of his own accord. 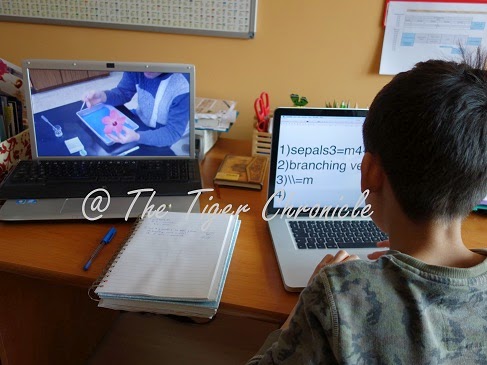 Once Tiger was happy with what he has learnt from the clip, we proceeded with taking the flower apart.  We first took apart a 'normal' daffodil flower. 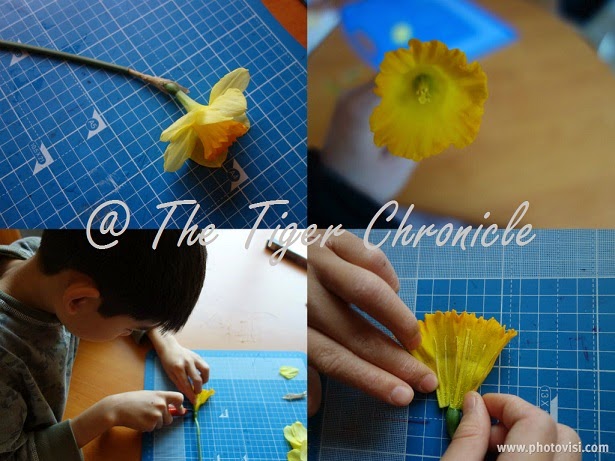 We used a clear sellotape to stick the various parts of the dissected daffodil in Tiger's nature journal:


The details of the male part (stamen = anther + filament) and female part (pistil or carpel = stigma + style + ovary + ovule) are just too fascinating not to look closely in detail: 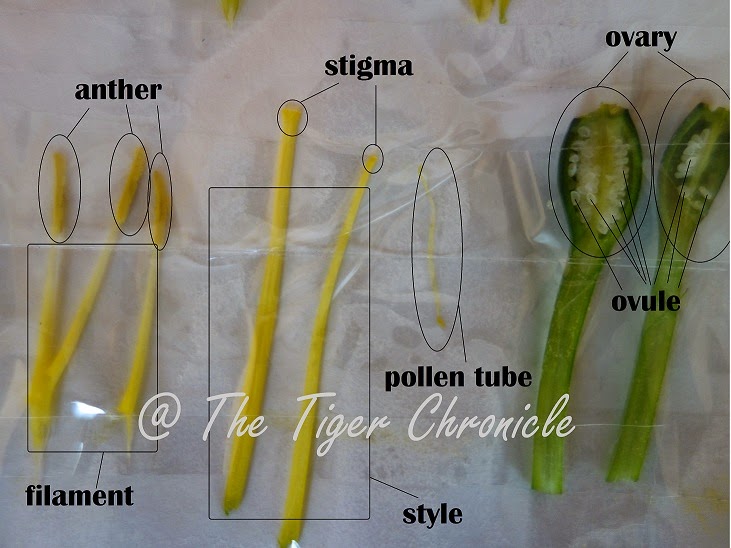 We then decided to check whether the 'mutant' daffodil flower is any different, so we repeated the process with the mutant flower: 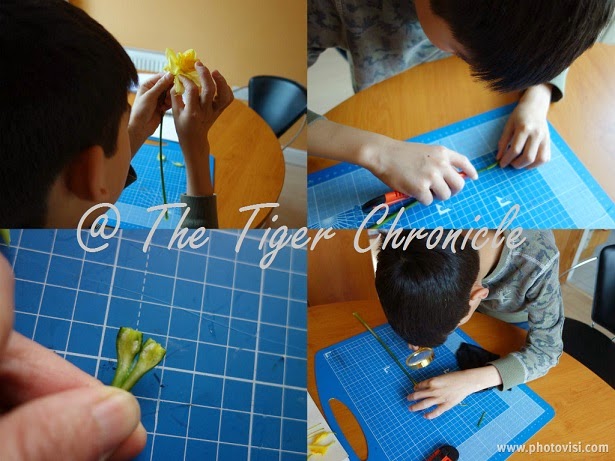 We were not surprised to observe a number of differences in the mutant flower when compared to the normal flower:

I had Tiger fill in the worksheets from here based on our exercise. 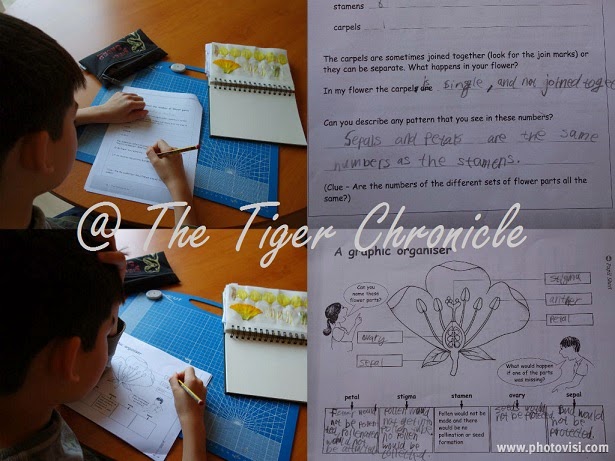 During dissection, it would have been a perfect to observe the pollen grains and the various flower parts under a microscope.  However, since we do not own one, we resorted to looking up the relevant information in a book that provided us with superb photographs of what we would have seen under a microscope, along with detailed explanation of the subject.

To round up what we've studied so far, we played the matching games using the cards printed off from  here.  It is basically a slightly simplified game as the one we played earlier using the Montessori card set. 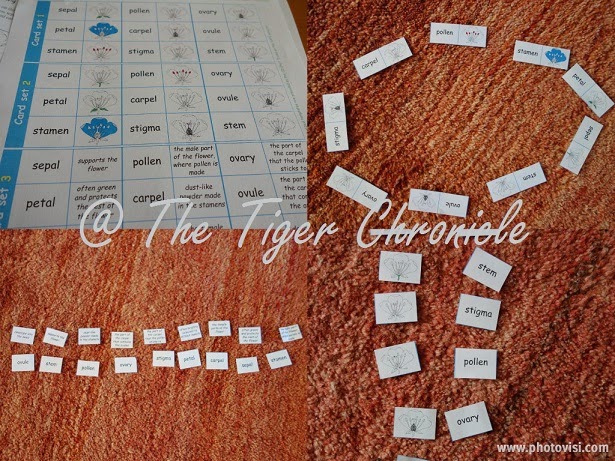 This is part of our flower study series known as: