Algebra.  Sounds like a really sophisticated maths idea, doesn't it?  The truth is, most children already intuitively know the basics of algebra without calling it that.  The concept of single-variable algebra can be very simply introduced using the following tools:

To prepare the materias, I first made a clay ball with the equivalent weight of a 1p coin. 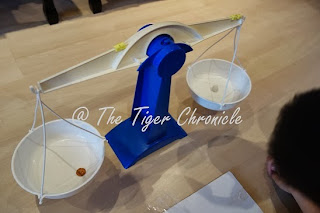 I often like to get Tiger involved in making his own learning tools, so I got him to help me make the equivalent-weight clay balls. 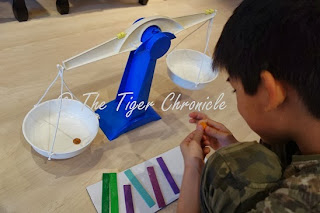 That is, until it occured to me that I had to make the clay balls myself to make the game work, so I diverted his attention to a few slices of cake while I carried on with making the following clay balls: 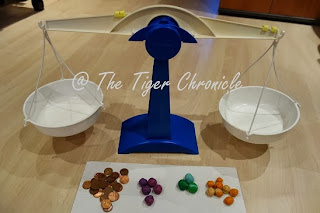 The first step is to give the child an idea of balance, i.e. the one side should be the same as the other.  Without Tiger seeing, I placed five 1p coins in the right-side tray and covered it with a tissue paper.  Then I asked him to find the equivalent number of coins to balance the scale.  When he found the scale to balance with five 1p coins, I lifted the tissue paper to reveal the answer. 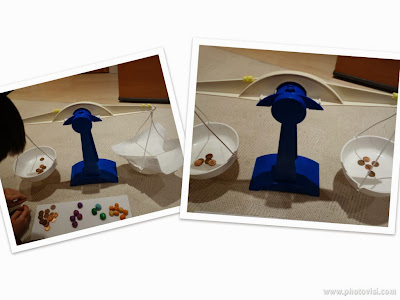 Next, I repeated the step above, but this time I used two orange clay balls and four 1p coins on the covered, right-side tray.  I then asked Tiger to find the number of 1p coins it would take to balance ths scale.  He found that it took seven 1p coins to balance the scale. 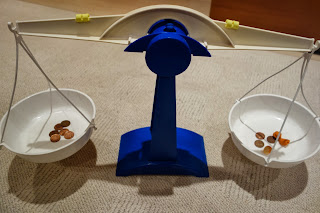 Tiger immediately knew then that each orange clay ball represents one 1p coin.  I asked him how he would represent the information on the scale as an equation.  This is his equation: 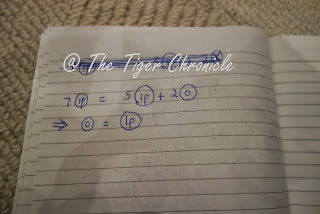 I did another exercise with him to make sure that he understood the concept.  This time I used three orange clay balls and three 1p coins, asking him to find the equivalent number of 1p coins to balance the scale. 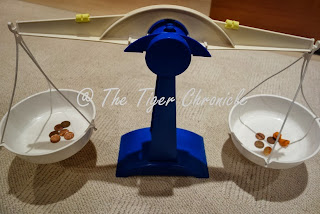 After he has found it to be six 1p coins, I asked him to write the equation down again:

Just as Tiger was starting to think the game was too easy, I changed it slightly.  For the next go I used one purple clay ball and five 1p coins (covered up using tissue paper) in one tray, and asked Tiger to find the number of 1p coins to balance the scale.  He found it took seven 1p coins.

When I removed the tissue paper, Tiger was briefly stumped by the number of items on the right-side tray.  He quickly figured out that the purple ball must weight more than the orange balls that were used earlier.  He then went to to figure out that the purple ball must be equivalent to two 1p coins.  When asked for the equation for this, he said: 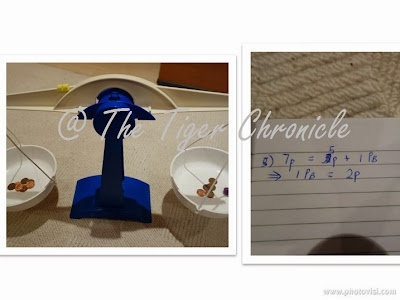 More variations on the same theme followed.  Next up, I used two green clay balls and five 1p coins.  It took eleven 1p coins to balance that. Using the same reasoning as the example above, Tiger worked out that each green ball is equivalent to 3p.  Obviously there have been some mental calculations that involved addition, subtraction, and division to arrive at the answer but Tiger doesn't like to write out all the intermediate steps.  Therefore the equation for this is shown as: 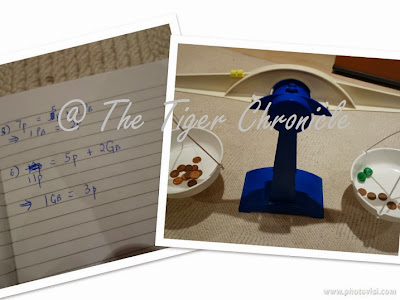 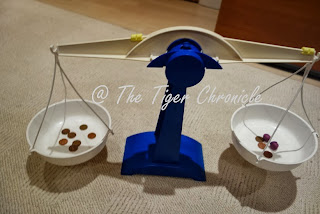 Once again, he worked out that each purple ball is equivalent to two 1p coins, equation as below: 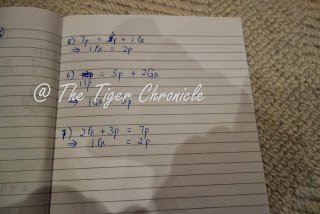 This time, Tiger wanted to show his 'proof' of how he arrived at his answer, so he demonstrated by removing three 1p coins from both trays, leaving four 1p coins in the left-side tray and the two purple balls on the right-side tray.  He did not write out the equation for this, so every step was done visually and orally.  For those who would like to see his demonstration in mathematical form, this is how it would look: 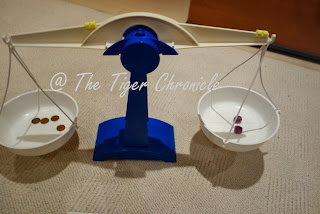 From here, it is then a matter of applying simple division to find what each purple ball is.