We have been working through Robin Hood this term, both as a book of literature as a part of our history (UK and World).  We have a few different versions of the story of Robin Hood, and the one that we have used for our literature study is the version by Howard Pyle. 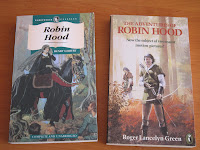 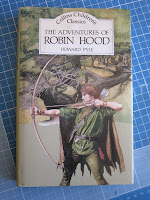 For a start, we watched the following documentary to gain a broad overview of the character as interpreted by different sources (historians, Hollywood, etc):


We find that the unit study approach to be working well for us in this respect, so we are using the lapbook resources from Homeschool Share as our basis.  We work through the units slowly, taking our time to explore in depth the various suggested points.  Although Tiger has been working through the various lapbook pages, I am not too concerned about whether he eventually puts them into lapbook form - it would be great if he were to feel inclined to arrange the various pieces of information that we are saving in a file into a presentable format, but if he doesn't want to do that, it's not a big deal for me.  I am happy as long as he has been engaged in the learning process and can orally present what he has learnt.  The final output (lapbook) is a non-essential part of our process at the moment. 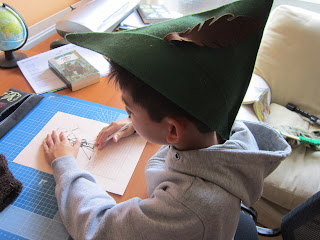 After that, we wanted to know whether the character is true or fictional:


One of the points brought up in the documentary above in ascertaining how true the character of Robin Hood really is, is the possibility of surviving in all seasons in an English forest.  This is an interesting point to consider, given the sheer dampness of forests most of the time, not to mention how often it would be raining.  Tiger and I spent a fair amount of time considering whether that would be possible, and what it would take to live in the forest for any length of time.  For this discussion, Tiger consulted his favourite survival book: 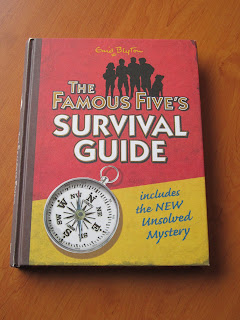 We were lucky to attend a talk on medieval English archers given by a very experienced and knowledgeable member of an archaeological club that Tiger belongs to. 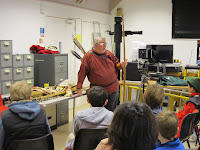 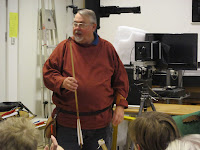 In the two-hour talk, the man covered in great details:
The most common and formidable type of bow in England in the middle ages was the long bow, which was made from yew trees.  As part of the talk, we were shown an actual growing yew tree in an ancient Anglo Saxon churchyard a few yards away.  We not only saw the yew tree, we were also cautioned about it being poisonous (branches, leaves, and the pip of its berries). 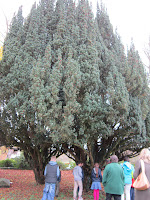 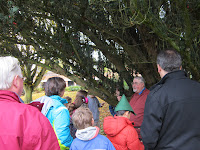 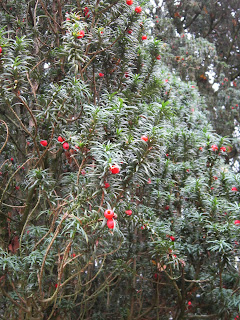 Tiger wore his Robin Hood hat to the event, and it became an impromptu topic for the man to talk about.  He told us how the hat would have been very useful when worn by hunters in different ways under different weather conditions.