"Creativity is nurtured by freedom and stifled by the continuous monitoring, evaluation, adult-direction, and pressure to conform that restrict children’s lives today. "

I'm been relatively quiet on this blog lately, not because life hasn't still continued for us but because I'm still learning to understand the changes that are taking place in our homeschooling approach.

You see, once I've let go of my lesson plans, I am not entirely sure how to make sense of the spontaneous and unplanned learning that is taking place in front of me.  This is all very new to me, so I am very much a new learner in this sense.

Another new learning for me is to have patience.  As there is now no specific objective boxes to tick, I no longer have means to report that Tiger has learnt such-and-such knowledge in say, two days, or that he has completed five pages of certain workbooks.  What has changed is that Tiger's learning now appears to me to be more like pieces of puzzles - somewhat disjointed but all belonging to the same big picture nonetheless, even though where each piece belongs is not very obvious at the moment.  Therefore, now it takes much longer for me to piece together the seemingly random activities that he does with his time to get a sense of where he is taking them.  His learning process is a bit of a mystery to this very systematic, squential Mum, but it all makes perfect sense to him.

One example that I can discuss here with some clarity, after two weeks of observation, is this whole theme/idea/project of war (or what I currently group under "Classical Civilisations" for the benefit of my own understanding).

The following are the activities that I have observed Tiger doing on his own accord over a period of two weeks: 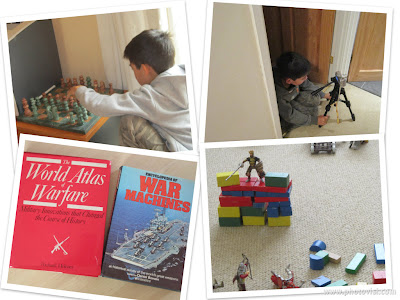 1) playing with the camera to make videos;
2) watching more documentaries on Greek and Roman battles;
3) clay modeling;
4) playing with toy soldiers and building blocks;
5) playing ches;
6) making armour and weapons out of cardboard; and
7) reading books.

Seem pretty random, don't you think?  However, then a few other things happened that gave me a glimpse into how Tiger is connecting the different dots together.  One of those activities is him making his own short film of the battle scene reenactments using his toy soldiers: 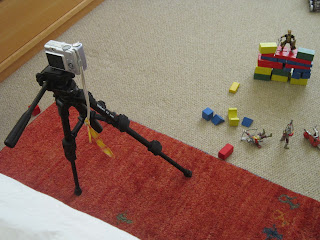 When Tiger realised that he did not have any modern toy soldiers to make a more modern battle scene (after watching The Battle of Waterloo 1815), he decided to make some out of modeling clay.  He declined all my suggestions and help, and figured out by himself how to mould the clay into the soldiers in different positions.  If he hasn't been watching so many documentaries and reading so many books on this topic, he probably would have some difficulty to fashion the various positions without any references. 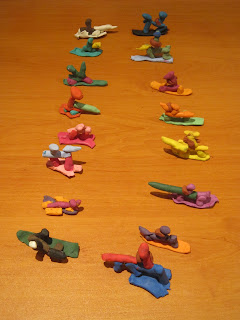 Another activity that reveals to me that learning is continuously taking place within Tiger is through our informal discussions, which can go from talking about the hows and whys of battle successes due to strategy and positioning, to the more philosophy questions such as whether wars could ever be justified.  It would have been easier for me to record that Tiger has completed two dozen pages of history questionnaires, or that he has sat through three history lectures, but that clearly is not how he learns best.  We sat through the first lecture of The Greek and Persian Wars from The Great Courses but Tiger does not like the feeling of having someone talk at him all the time, so that has gone onto the back burner for now.

Of course, in the past two weeks Tiger has been engaged in many other activities besides the ones I've listed here.  This is only a snapshot of the activities that I have been able to make sense of within my mind after two weeks of observation.  Other observations will follow once I am able to see how they fit into a bigger picture. 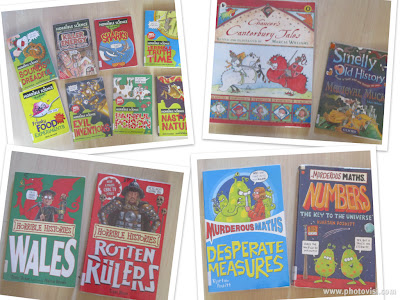