It's all about timing 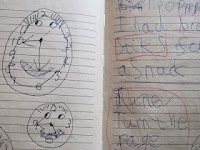 When it comes to formal writing lessons, Tiger has never been a big fan.  He tolerates them but will not do more than what is absolutely necessary for each lesson.  He finds the act of writing tedious on the physical level, and he often thinks much faster than he can get his ideas down on writing.  However, he loves to write short notes, messages, and lists so he does write something everyday outside of our formal lesson time.
In the past few months, Tiger has been writing in a notepad that he keeps by his bedside every morning.  On the few occasions when he showed me his notepad, I saw that he has been writing out one to two sentences about what he planned to do each day.  It was done entirely on his own account, so I was very encouraged to see him doing it.  In order not to squash his budding interest in writing, I did not correct any error in his notepad.
A few days ago, Tiger was in a particularly restless mood.  He was bouncing off the wall for the entire day, not feeling satisfied with any activity that we did.  By late afternoon, both of us were exhausted by his restlessness so I left him to entertain himself while I cooked dinner.  He got into his "time machine" (Tiger has been very interested in the concept of time and on the topic of time travel lately), and decided to keep a travelouge of his 3-day adventure in what he calls his "time car". 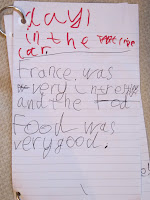 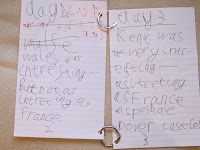 When Tiger showed me what he has written, I suddenly had a brainwave: art journal!  I had thought about doing art journals with Tiger before, but it never came together because he was not ready for it.  Perhaps part of the reason it did not happen was because I might have turned it into an academic exercise -- I am much more relaxed these days about how Tiger learns.
After dinner, I asked Tiger whether he would be interested to try out art journaling.  I gave him a journal book that I had bought for him a few years ago when the journaling idea first came to me, but since that never happened the journal has been in the cupboard until now:
I then took out my own journal and said we would work alongside each other.  I think having me work together with him on this, at least at the start, has been very useful in a few ways: 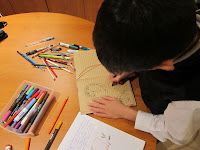 So we got started.  In order not to overly complicate the process at the beginning, I just set out the dry materials (felt tips, markers, coloured pencils, and ballpoint pens).  I explained that there are basically no rules (yay!!) to art journaling, but to get us started I laid down a few simple guidelines:
Once Tiger got started, he carried on page after page, and did not stop until he had completed 8 pages in his journal.  That took 45 minutes.  Wow, compare that with the 15 minutes of daily coaxing that happens in our writing lessons!  More importantly, he enjoyed the process so much that he did not want to stop and wanted to do it again the next day. 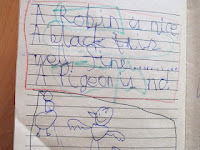 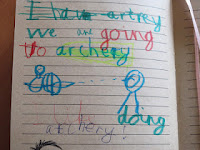 Our first session has been a huge success for us and we intend to do more of it together.  There is certainly a lot of potential to explore and much scope to expand into in this area.  For example, we might try a themed session next time, or include other media..... the possibilities are endless!


I have done very little mixed media work in the past, but trying out art journaling has sparked my curiosity and interest in this area.  Hence, for my own development, it would be very interesting to try out something new.  Even if it does not change my style (which I am sure it will, in some ways) it will at least give me a break from my own art making and training, which tend to lean towards the academic/serious side, and allow me to experiment and have more fun in art making.

This post is linked up to several blog hops, where you can visit to see what other homeschoolers have been busy with.  It is also linked to the Homeschool Showcase #94.
Posted by Hwee at 8:45 am