This post has turned out to be more difficult to write than I had expected.  In fact, I have deleted three previous attempts at writing about what we are going to do for Tiger's Year 6 journey because I've realised that what we do here is not just about book lists or the types of external activities that Tiger is engaged in.


This realisation came about after a recent conversation I had with a deputy headteacher of a private school where she was very interested to find out how Tiger is being taught.  While I tried to explain to her about our approach which stems from the fundamental principle of mutual respect between the teacher (me) and the student (Tiger) that in turn results in positive relational interactions that propels our learning journey forward, she was convinced that I must be using some kind of secret formula/curriculum/resource that the school teachers have no access to, based on what she has observed of Tiger.  I emphasised that it takes more than a curriculum list, although I also shared with her the sources of Tiger's curricula since Year 1 as the list was clearly what she was after.

Perhaps I have not explained it well, or maybe the actual process can't be explained so easily.  Having said that, I do have a broad overview of what we will aim to focus on over the next 12 months.  This is a plan that I now share with Tiger to get his input and feedback on the nitty gritty details with regards to the actual implementation as the months ahead unfold.  Tiger is in the position to share ownership of the learning plan and to provide input in terms of the order in which he will approach certain topics, and the materials he prefers to use to learn.

So, here is our broad plan for Year 6:
History
History remains the spine of our learning plan, so we are returning to the Ancients in Year 6, which will span the first civilisations to the fall of Rome.  This will be our second time studying the Ancients, so the focus this time round will be on developing analytical skills (for logic stage) rather than facts gathering (at grammar stage).

Science and Nature Study
Since we are taking on the Ancients again, it seems logical to us to focus on Earth Science, which allows us to start way back in prehistory and follow the development of Man's understanding of his relationship with land, sea, and the sky.

English
I believe it is important to acquire a love of the language before one can truly be motivated to put in the effort to really master it.  Therefore, in addition to reading widely and in keeping with the historical period being studied, developing technical linguistic skills such as spelling, grammar and writing, Tiger will also be enjoying poetry, hopefully with tea and cake from time to time!


Chinese
After a very successful year at the Chinese school where Tiger took weekly Chinese lessons, we were both disappointed when there was a change in staff at the beginning of the year.  Tiger's new Chinese teacher taught in such an uninspring way (compared to his previous teacher) that he could not bear to go to class, so I took him out and resumed teaching him at home.  Unsurprisingly, we find that we are covering wider topics in a quicker pace compared to the Chinese school, so it looks like I will continue to teach Tiger the Chinese language myself.

Latin
I was listing the Latin resources for sale one day when Tiger walked by, saw what I was doing, and decided to have a go at the placement test, just for fun of it.  When he scored 97% at the Level 1 test, having no contact with Latin in the past 18 months, he looked at me and mused, "I guess we'd better resume Latin!"  It is so much easier when it is Tiger's own decision to take up Latin again!

Maths
We have been hopping around quite a bit in maths for two years, primarily because at one time, Tiger was not too keen on following any curriculum.  Even so, we have been able to cover the same topics as are covered in schools, and more.  In that sense Tiger hasn't suffered any gaps in maths compared to school-going children of the same age.  This summer Tiger has shown signs of becoming more cooperative (!) so I hope he will complete RightStart Level E alongside the supplementary maths activities that we have been doing these past two years.

Music
Unless Tiger shows a strong desire for instrumental lessons, his music training will consist of:
composer study - I am happy to follow the suggestion made by Ambleside Online to focus on knowing the works of one composer per term.  However, instead of following their schedule, which is a perfectly good one, we have picked and chosen the composers whom we are most interested in:

Art
Tiger had the opportunity to gain the Bronze Arts Award last year, which he completed successfully. 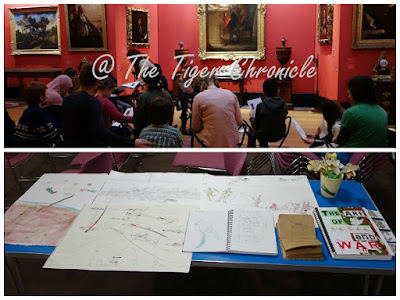 He has been invited to carry on with the next level but he has decided to take a break from it, in order to get back to just creating art for the sheer joy of it rather than worrying too much about documentaion and reporting.  Tiger says that he may continue with the next level in a year or two to allow himself time to mature a little bit more and to grow in other areas so that he may get more out of the process of acquiring the award.  What he says sound very reasonable, and going for the first level was just for a bit of fun and experience so it really doesn't matter in the overall scheme of things.  I am nonetheless pleased with his show of self-awareness and knowing what he wants to do, so he has my full support in his decision to pause.

Without the pressure of working towards the specifications of the award (which involves a lot of report writing), we can resume our leisurely pace to learn art history as we encounter it in our other studies.


External Activities
As always, I seek to strive a balance between individual study and group actitivies for Tiger so that he experiences both in the most effective, productive way. 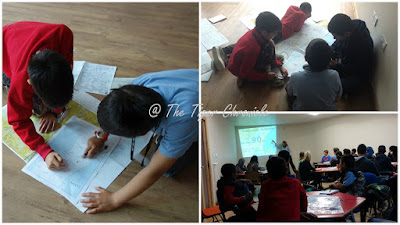 The above is quite enough for a Year 6 boy, don't you think?