Since we have had such fun with tangrams previously, we continued working with working with forming numbers with the seven pieces.

We started with Tiger forming various numbers as best as he could, without referring to the 'answers' provided in the lesson plan.

After Tiger had formed the numbers in his own way, we looked at the 'answers' to compare Tiger's numbers with the suggested answers.  I do not know whether there is a right way or wrong way to form the numbers using tangrams -- I assume that there isn't only one right answer -- so I only refer to the ones given in the lesson plan as suggestions rather than the only way to solve the puzzle.

Looking at the answers was helpful in giving Tiger ideas on how to use the pieces in different ways to form the same numbers. 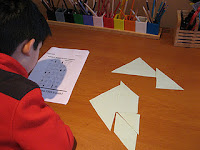 Compared to his approach, the answers given focused on forming the numbers in a more enclosed manner.  Tiger then formed the numbers again, this time following the examples given.

This post is linked up to several blog hops, where you can visit to see what other homeschoolers have been busy with.  It is also linked up to Math Teachers at Play blog carnival #48.