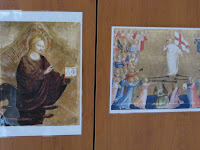 'Fra' is actually a term meaning 'Brother', since Angelico was a monk as well as a master artist in the early Renaissance period.  I must admit that I am not overly excited by religious paintings, but they were the main types of art work produced for hundreds of years when the Church was a part of everyday life so it makes sense for us to learn something about it.

Picture Study
The first place I go for artist study is BBC Your Painting site.  It is very relevant to me because this site lists the art works that are held in the British art museums and galleries.  Even so, there is not much information on Fra Angelico there, although we did spend some time looking at the paintings there, and discussing about the prevalent style, symbolism, and the use of Biblical stories in the Middle Ages.

After the generic introduction, we focused on a specific painting, The Adoration of the Magi, for further exploration and discussion.  The online tour of this piece of art work, used together with the accompanying notes, was very helpful in this regard.

However, we still did not know much about Fra Angelico until we watched the following two clips: 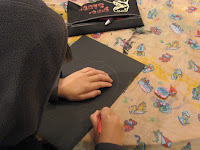 The only thing that Tiger found exciting about the art pieces in this period was the use of gold leaf to highlight significant figures in the paintings.  The suggested activity in Discovering Great Artists was to use 'silver leaf', a.k.a. alumnimum foil.

Tiger first sketched his picture on a black card with a pencil.  I suggested to him to make a big drawing so that he would have enough room for the foil.  He decided to draw the head of a holyman, so that he could use the foil as halo around the man's head.

Once the sketch was done, it was time to glue the aluminium foil onto the card where the halo was going to be, followed by painting the rest of the picture. 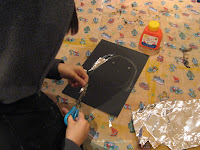 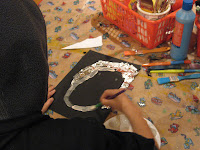 The end result turned out to be something very different from what I was expecting to see, but Tiger was happy with how his work turned out.  I thought (to myself) that the final result seemed more appropriate as an Expressionist work than an early Renaissance work, but as long as the artist himself is satisfied with his own creation, I do not feel I should criticise his creative efforts.  Afterall, I may not fare any better if I were to do it myself. 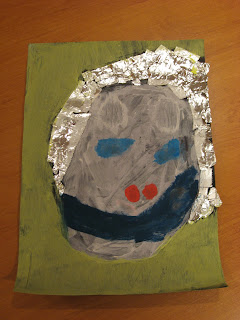 This post is linked up to several blog hops, where you can visit to see what other homeschoolers have been busy with.  It is also linked up to Homeschool Showcase #90.