We have had a month of summer -- it started when I declared summertime at the end of June.  I had every intention of slowing down our pace and relaxing.  We did that to some extent, in the sense that we did formal lessons at about 20% of our normal rate.  However, learning has not stopped even though we have drastically cut down on formal sit-down lessons.  I am still fully engaged with Tiger everyday in various activities.  Maybe because of our engagement in non-lesson type activities, I feel more like a 'normal' mum, than a homeschooling mum/teacher.

Here are the highlights of what we have done for the first half our summer: 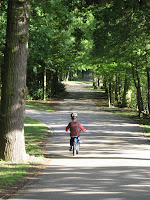 Outdoors:  Lots of it!  Afterall, that is how we mark our summer.  I have taken up running for 3 to 4 times in the evenings each week, while Tiger has been cycling lots more and for longer distances. 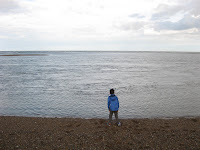 Also, the beach!  For us, Summer is incomplete without a trip to the beach at least once!  It was a pebbly beach so Tiger spent his time throwing pebbles while trying to skim them.

I combed the beach and found a few natural treasures. 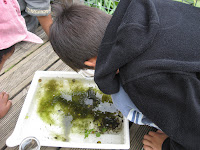 We have also been continuing with our family nature walks.   These walks usually last around 2-3 hours each time, so we have been getting quite a lot of these in, thanks to the longer daylight hours.  One special occasion this summer is particpating in the BioBlitz at a botanical garden.  Tiger learnt about lichens, marveled at exotic plants and flowers, netted insects, identified birds, dipped in a pond thriving with wild life....


Summer Schools: Tiger successfully completed 4 of the in-house half-day 'summer schools' that I had created for both of us to do together. 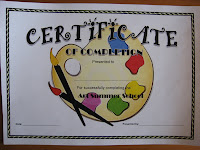 First we had a week of Art School, which became a trial run for a new art curriculum that we will start using in September.  Tiger responded enthusiastically to all the art sessions wherein we covered the basic elements of art such as colours, symmetry, different representations of the same subjects.  At the end of the week, I gave Tiger a home-made Certificate of Completion, which he was happy to receive and to display on the wall. 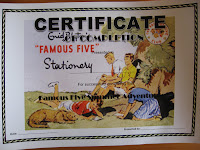 The following week we decided to have an impromptu Famous Five Summer Adventure Week.  Tiger received his Certificate of Completion at the end of the week, having successfully completing the following tasks:
- read all 21 books in the series;
- made food inspired by the recipes or food mentioned in the Famous Five books (we made Ginger Beer, an Upside Down Pineapple Cake, a Cherry Cake);


- have an adventure in a tent (Tiger converted two huge cardboard boxes into a one-bedroom playhhouse in the garden and spent most of the week living in the playhouse, eating and drinking inside it and pretending to be guarding his 'castle' from potential invaders); 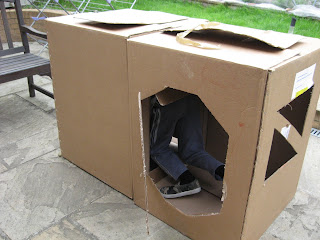 - have a proper English tea with fine china tea set. 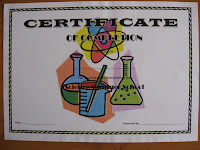 Science Summer School kept up Tiger's enthusiasm for science experiments with us doing 5 very short experiments each day.  I let Tiger choose the experiments from this book.  He mostly chose experiments in the Physics and Chemistry sections, which surprised me slightly since we have not formally covered these areas before -- maybe that was why he wanted to try them!  Anyhow, the experiments were quick and easy to do, with a one-paragraph explanation of what was behind the results.  Examples of our learning from the experiments were: 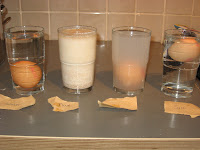 - Find out which liquids an egg will float in;
- Make a milky plastic;
- Find some materials that can dissolve in water;
- Watch stars aooear when tiny crystals grow;
- How can sound waves be collected and directed;
- See how sound can be amplified;
- Find out how differently pitched sounds are made;
- Investigate shadows and see how they work;
- Observe multiple images made with reflection;
- See how watert reflects light;
- Made our own sandstone;
- Investigate the shapes of continents and the history of the Earth. 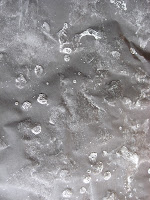 Tiger also narrated from 4 topics of his choice from the How it Works Annual.  The narrated topics were:
- Planets of the solar system;
- Life of a Roman soldier;
- Volcanoes explained;
- the Earth's structure; 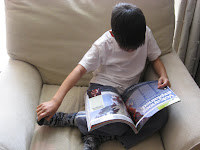 Although it had been a fun week, I personally do not think Tiger has learnt much from doing science in such a haphazard manner.  We definitely need a more robust science curriculum. 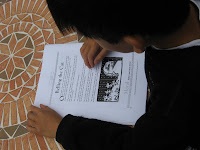 We did Aesop's Fables in our week of Literature Summer School.  Since Tiger has read the entire story to himself, I used the time this week to work on his storytelling skills.  First, I had Tiger read the story to me as if he were a professional storyteller.  To do this, Tiger had to use different voices to represent the different animals, as well as to act out the stories.  This was followed by a few comprehension questions and discussions about the moral of each story as well as how they relate to our lives.  Each story was also accompanied by a simple science experiments and/or research topic, as well as a related craft.

Our summer continues with Part 2 (August), which will be updated at the end of the month.

Email ThisBlogThis!Share to TwitterShare to FacebookShare to Pinterest
Labels: All Year Round Blog Carnival-summer, blog hop, carnival of homeschooling, summer