How did he do it?

We resumed lessons this morning with maths.  Usually we do a little bit of mental warm up with me asking Tiger to solve a few maths equations just to start his cogs turning, especially after last week's cold and total absence of any form of formal lessons... 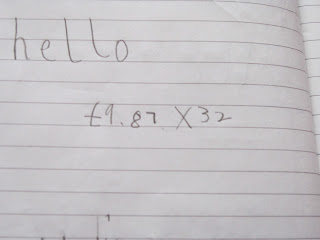 And stared at it for a minute (I don't have the patience to wait for more than a minute for a maths answer) before I suggested to him that maybe it would be easier to write the question out vertically and use the long multiplication method.  He accepted my suggestion and dutifully wrote it out as requested: 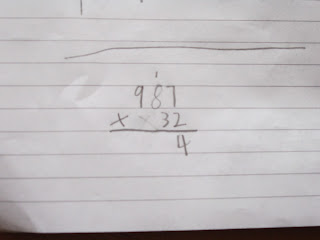 As you can see from the above, my suggestion didn't go very far to help Tiger.  After another 30 seconds of staring at it, he gave up on my suggestion and said he wanted to 'think about it'.  He took 30 seconds before telling me the answer: £315.84

I had to double check the answer with a calculator.

When asked how he did it, Tiger couldn't explain his mental process to me, although I could guess it from the way he gave me the answer.  He gave me the answer in two parts.  First, he told me it was '£315 and something', then in the next few seconds, he had worked out the rest was 84p.

Tiger was very pleased that he got the correct answer, but quickly told me that he doesn't want to do anymore today since his brain is 'worn out from all that calculating'.

If he were in school where everyone is expected to show their maths workings on paper in a step by step manner, Tiger's unusual mental process would probably be labeled as some kind of 'learning difficulty' or 'special need', whereas being taught at home means that he is in an environment with a parent who recognises and supports his unique way of learning.

There has been much debate in the UK about how maths is best taught in schools.  There doesn't seem to be any consensus yet (I don't expect there to be), but Tiger has seldom been taught to memorise anything (we tried to do that with grammar following the WTM recommendations and we both found that to be excruciatingly dull and ineffective), not least learning time tables by heart.  I don't believe in rote learning.  We are more inclined towards gaining an understanding and appreciation of how things work, including mathematics.