We are definitely working through a theme of geometry here.  It's all about lines and shapes these days. 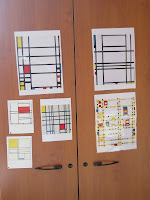 Picture Study
This is an introductory lesson I gave Tiger on Piet Mondrian.  At first glance, Mondrian's "grid work" is deceptively simple but obviously there is more to them than random lines and colours.  Once again, I could not find introductory biographies of Mondrian from the library, so I used a combination of the biography found here while looking through his paintings chronologically to give Tiger an idea of how Mondrian's style was influenced by the various art movements during his lifetime.  I feel it is important for Tiger to know that Mondrian was able to paint very well representationally before he turned to simplification and abstraction.
After looking at the printouts on the cupboard door for a while, I asked Tiger for a general narration of what he saw.  He struggled to say anything beyond "straight lines" and "primary colours", so I asked him to imagine how he would describe Mondrian's work to someone who is blind.  That helped.  Tiger managed to expand his description to include:
Out of all the printouts, Tiger was most attracted by the bright colours of Broadway Boogie Woogie.  He was tickled by its title and was intrigued by the story behind the name.  We watched the following clip to get a better idea:

The clip gave a good overview of Mondrian and his style, highlighting that both the space and the lines are equally important in Mondrian's work.  Tiger had to watch another clip to understand what a Boogie Woogie is:

We watched one more clip that gave a good overview of how Mondrian's style evolved from representational to abstract:
Hands-on project
I modified the lesson plan here slightly for the project.  First, Tiger planned his layout using the pre-cut black strips,bearing in mind the importance of spacing. 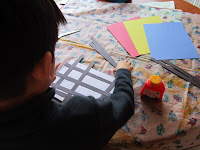 Once he was happy with his design, he glued them on and trimmed away the extra bits that were went beyond his white paper. 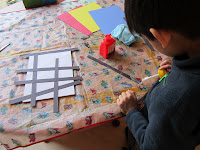 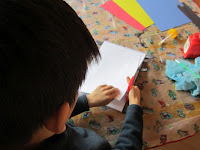 Next, Tiger had to decide where to put the colours.  I reminded him that Mondrian's choice of colours and spacing was done with careful planning and thought.  Tiger pencilled in his colours. 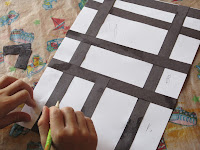 The final part was to measure the rectangles from the grid, transfer the measurements onto the corresponding coloured construction papers and cut them out.  I helped Tiger with transferring the measurements because this part was somewhat fiddly.  He did the cutting and pasting. 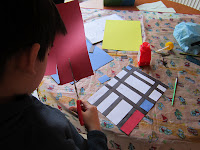 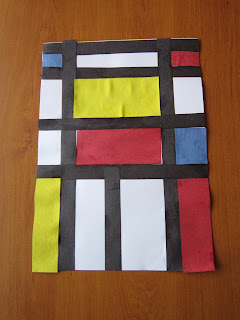 As he was doing the project, Tiger questioned why he was making a collage rather than painting (since Mondrian's mostly painted).  Good point.  Since he asked, I have other Mondrian projects lined up that will explore other aspects of his work.
This post is linked up to several blog hops, where you can visit to see what other homeschoolers have been busy with.  It is also linked up to the Charlotte Mason Blog Carnival - Education is a Life! edition.
Posted by Hwee at 8:09 pm