When it comes to studying British artists, JMW Turner's name always comes up amongst the top list.  With him being labeled as part of the Romantic movement, and after our study of John Constable, we thought we were going to see pretty much similar styles -- countryside scenes, detailed paintings, etc.  I am very glad we decided to study both artists separately as both of them could not be more different from each other.

Picture Study
Once again, I had a few postcard-sized reproductions of Turner's work on the door, as well as on my computer screen.  These were on display all the time so that Tiger was able to see them each day.  By now, he knows that he is expected to discuss/narrate any one of the pictures he sees on the door at some point. 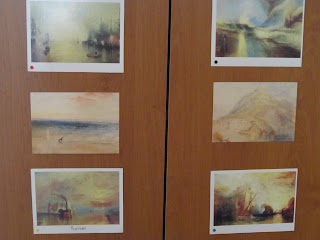 We used several sources to prepare for our discussion on Turner's style, his influences, and his most notable artistic achievement:
1) BBC Your Painting's Turner page was our first stop.  We looked through the slide show to familiarise ourselves to Turner's different works, and also listened to the audio clips.

2) We then took a visual tour of Keelmen Heaving in Coals by Moonlight here, followed by activities in the Inside Scoop - Tuner.

3) Bringing our focus back to England, we listened to the relevant parts of the National Gallery's podcasts (episodes 60, 65, 66, and 67) about Turner.

4) We also used the following book, with its short introduction and questions, to kick start the discussion: 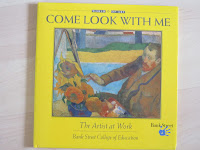 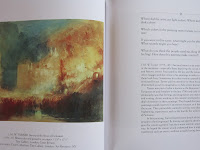 However, we found the following documentary to be most enlightening about Turner's life and his creative process (note: parental guidance needed due to a few scenes of nudity relating to life drawing):


Hands-on Project
Turner's work is very difficult to replicate at a child's level, for the simple reason that his style is one of romantic-realism.  Without years of practise and developed fine motor skills, it is extremely difficult to create a piece of art work at a child's level and to call it "Turner inspired", in contrast with some of the more expressionistic or abstract styles.  Nonetheless, we gave it a try. First, we looked through one of Turner's sketchbooks to get inspiration from his looser, watercolour work: 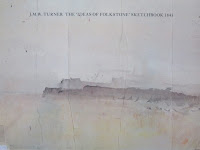 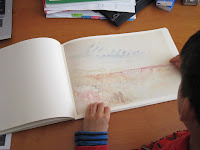 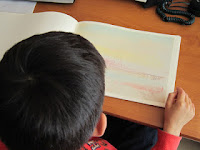 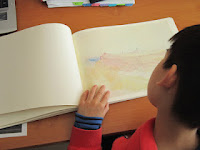 Once Tiger has had some idea of watercolour sketching, we decided to attempt an atmospheric watercolour painting based on Turner's Rain, Steam, and Speed - The Great Western Railway.   We listened to the short discussion here before starting on the project. First, the preliminary pencil sketch... 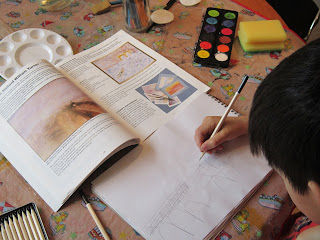 followed by a wash... 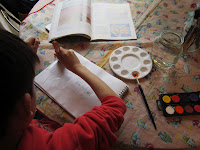 Tiger had fun laying in the details as he learned to use create different marks using a combination of different brush strokes, toothbrush, and the back of his paintbrushes. 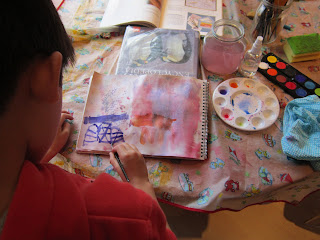 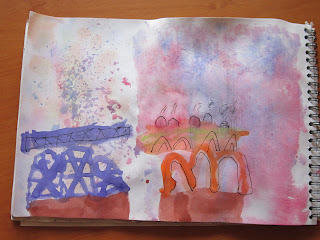 Field Trips
We went to the V&A's Room 87 to look at Turner's work, as well as Constable's work.  Nothing compares to looking at the original artworks up close! 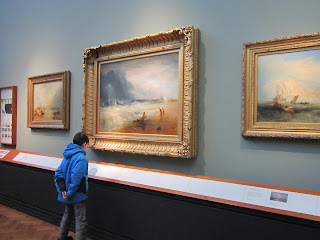 Tate Britain happens to be the best place to learn about Turner this time.  There was a lot of renovation going on when we went there, with the Turner collection being moved to another location.  The curator and workmen were in the process of moving the collection on the day we were there but they were nice enough to let us look slowly at the paintings without being disturbed.  I spent a long time standing in front of Fishermen at Sea.  Once again, Constable's and Turner's works were displayed in the same rooms.  As a quick 'test', I asked Tiger to identify Turner's work amongst all the paintings in the various rooms.  He faired very well in that. At Tate Britain, there is a special display about Turner's Experiments with Colour and Line in another room, so we spent another hour there learning all we could about Turner's techniques.

This post is linked up to several blog hops, where you can see what other homeschoolers have been busy with.  It is also linked up to the Carnival of Homeschooling 349th Edition.